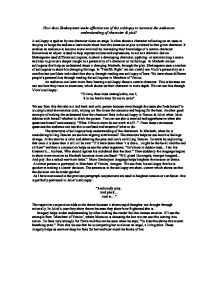 How does Shakespeare make effective use of the soliloquy to increase the audiences understanding of character &amp; plot?

How does Shakespeare make effective use of the soliloquy to increase the audiences understanding of character & plot? A soliloquy is spoken by one character alone on stage. It often shows a character reflecting on an issue in the play or helps the audience learn more about how the situation or plot is related to that given character. It enables an audience to become more involved by increasing their knowledge of a certain character. Sometimes an object is used to help express actions and expressions, to act as a dramatic device. Shakespeare used different soliloquies: to show a developing character, updating- or summarizing a scene and also to give us a deeper insight to a personality of a character or its feelings. ...read more.

Another good example of making the understand how the character feels is the soliloquy in Romeo & Juliet when Juliet debates with herself whether to drink the poison. You can see she is worried and apprehensive when she questions herself continuously: "What if this mixture do not work at all?..". From these continuous questions the audience can see she is confused and unsure of what to do. The structures of soliloquies help understanding of the characters. In Macbeth, when he is considering killing Duncan we see him arguing with himself. The structure helps us see how his feelings change. At the start he is calm and debating the pros and con's on killing Duncan. He starts by explaining that once it is done then it will all be over "if it were done when 't is done... ...read more.

As I have mentioned in the previous paragraph conjunctions are used to heighten tension or confusion- this is perfectly portrayed in Juliet's soliloquy: "And madly play.. And pluck... And in..." The repetitive conjunction adds to the drama because it shows rapid thoughts- not thought through rationally. In Juliet's case they show drama because they show how frightened she is. Imagery helps widen understanding by often making the reader feel the intense emotion. If I use the example from 'Merchant of Venice', where Morocco is choosing the box we can see this coming into action. He feels very strongly for Portia and this can be seen when he says, "To kiss this shrine this mortal breathing saint." From this we see that he is comparing her to almost an angel, a living saint. These imagery helps us see how deep he feels for her and how much he thinks of her. ...read more.