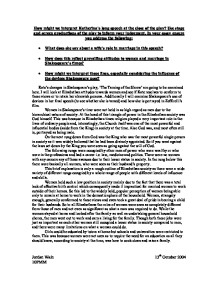 How might we interpret Katherina's long speech at the close of the play? Use stage and screen productions of the play to inform your judgement.

How might we interpret Katherina's long speech at the close of the play? Use stage and screen productions of the play to inform your judgement. In your essay ensure you address the following: * What does she say about a wife's role in marriage in this speech? * How does this reflect prevailing attitudes to women and marriage in Shakespeare's times? * How might we interpret these lines, especially considering the influence of the devices Shakespeare uses? Kate's changes in Shakespeare's play, 'The Taming of the Shrew' are going to be examined here. I will look at Elizabethan attitudes towards women and see if Kate resolves to conform to these views or to retain her shrewish persona. Additionally I will examine Shakespeare's use of devices in her final speech (to see whether she is tamed) and how she is portrayed in Zeffirelli's film. Women in Shakespeare's time were not held in as high regard as men due to the hierarchical nature of society. At the head of this triangle of power in the Elizabethan society was God himself. This was because in Elizabethan times religion played a very important role in the lives of ordinary people and, interestingly, the Church itself was one of the most powerful and influential bodies (aside from the King) in society at the time. Also God was, and most often still is, portrayed as being male. On the next rung down from God was the King who was the most powerful single person in society as it was widely believed that he had been divinely appointed. ...read more.

Given this time to herself Kate is seen slowly sinking down in to a chair a falling into deep though about Petruchio. She then rise and wanders over to the door to look at Petruchio through the door light which is made of red glass and casts a warm reddish glow over Kate's face. This seems to be a symbol of how Kate is beginning to warm to the idea of being with Petruchio. Due to the new interest being taken in Kate for once she seems to be making an added effort to improve how others see her. Before the arrival of Petruchio and despite being attractive didn't take pride in her appearance and retained her witch like appearance. She obviously didn't care what people thought of her appearance back then but now Kate is visibly attempting to improve people's perception of her. She begins to take pride in her appearance and flaunts her figure more in the clothes that she wears. For example her wedding dress is rather feminine and is of a white and green which do not reflect her shrewish character at all. It could be that with the new attention she is becoming more womanly and is enjoying the way men look at her. Her make up becomes lighter and she begins to smile more which seems to be a sign of how she appreciates the people and her surroundings more and also her new found, more feminine, approach to life. On the day of Kate's wedding she is delighted to find that she has received wedding presents and guests have actually deemed her important enough to attend her wedding day. ...read more.

Shakespeare uses various metaphors to convey his ideas to the audience clearly as a metaphor is easy to use and is where a comparison is made between two seemingly unrelated objects and it is a transference of one object's characteristics into another. "But now I see our lances are but straws", the lance in this image is what Kate considered to be a woman's weapon and she believes it is no longer effective ( the lance could symbolize shrewish characteristics, duly shown by Kate). This change is suggested by the lance changing into it's complete opposite, a straw. The straw symbolizes what a dramatic change can occur because what was once a powerful weapon cannot work in a marriage. So, now Kate is married, or even found her match in Petruchio, she cannot use this weapon as it is in-effective now and pales to what effect it had previously. The straw could also symbolize how her will was weakened in the presence of another strong willed character. In conclusion I believe that because of Kate's obvious free will and ability to make her own decisions I believe that Petruchio must be seen as one who recognises and respects her wit, sharp tongue and fire. So Petruchio did not merely tame her but instead he gave her the confidence to be herself and the ability to shed her shrewish persona. Petruchio clearly achieved his goal and more by 'taming' the shrew which everyone saw in Kate and they sort of joined In a union against a society which neither fit into after coming to some kind of mutual understanding. Jordan Wain 13th October 2004 10PMM ...read more.