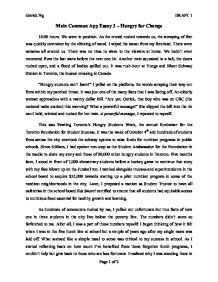 Hungry for change. This was Feeding Torontos Hungry Students Week, the annual fundraiser for the Toronto Foundation for Student Success. It was the week of October 4th and hundreds of students from across the city overtook the subway system

16:00 hours. We were in position. As the crowd rushed towards us, the stomping of feet was quickly overtaken by the clinking of metal. I wiped the sweat from my forehead. There were cameras all around us. There was no time to wave to the viewers at home. We hadn't even recovered from the last wave before the next one hit. Another train squeaked to a halt, the doors rushed open, and a flood of bodies spilled out. It was rush-hour at Yonge and Bloor Subway Station in Toronto, the busiest crossing in Canada. "Hungry students can't learn!" I yelled on the platform, the words scraping their way out from within my parched throat. It was just one of the many facts that I was listing off. ...read more.

Since 6:00am, I had spoken non-stop as the Student Ambassador for the Foundation in the media to share my story and those of 90,000 other hungry students in Toronto. Five months later, I stood in front of 7,000 elementary students before a hockey game to continue that story with my face blown up on the JumboTron. I worked alongside trustees and superintendents in the school board to acquire $25,000 towards starting up a pilot nutrition program in some of the neediest neighborhoods in the city. Later, I proposed a motion as Student Trustee to have all cafeterias in the school board Eat Smart! certified to ensure that all students had equitable access to nutritious food essential for healthy growth and learning. ...read more.

As I started reflecting back on how much I've benefited from those forgotten lunch programs, I couldn't help but give back to those who are less fortunate. I realized why I was standing there in that cold, wet October evening with other students: because I couldn't stand just being a statistic - I wanted to change it. And we did. We raised over $1000 per hour in each subway station (a total of $12,000 in three short afternoons) simply through student volunteers, enough money to buy 12,000 breakfasts for hungry students. It has been a few years since I was in the lunch program, but I know that while I am no longer in it, countless students still rely on them to succeed in school. ?? ?? ?? ?? Gorick Ng DRAFT 1 Main Common App Essay 3 - Hungry for Change Page 1 of 2 ...read more.