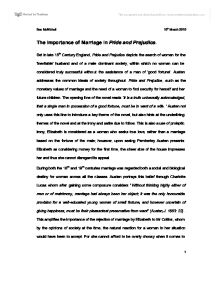 Importance of Marriage in Pride and Prejudice

The Importance of Marriage in Pride and Prejudice. Set in late 18th Century England, Pride and Prejudice depicts the search of women for the 'inevitable' husband and of a male dominant society, within which no woman can be considered truly successful without the assistance of a man of 'good fortune'. Austen addresses the common ideals of society throughout Pride and Prejudice, such as the monetary values of marriage and the need of a woman to find security for herself and her future children. The opening line of the novel reads 'It is a truth universally acknowledged, that a single man in possession of a good fortune, must be in want of a wife.' Austen not only uses this line to introduce a key theme of the novel, but also hints at the underlining themes of the novel and at the irony and satire due to follow. This is also a use of proleptic irony, Elizabeth is considered as a woman who seeks true love, rather than a marriage based on the fortune of the male; however, upon seeing Pemberley Austen presents Elizabeth as considering money for the first time, the sheer size of the house impresses her and thus she cannot disregard its appeal. During both the 18th and 19th centuries marriage was regarded both a social and biological destiny for woman across all the classes. ...read more.

was not necessary to live in each others' company for a minimum of 3 weeks prior to marriage like it was in England, thus allowing for an instant marriage. Much like the partnership between Darcy and Elizabeth we are made to wait for them to be partners in dance, it is a recurring theme throughout the novel that the longer the time period before the first dance between a couple the longer the time period will also be before they are romantically interested in one another. "To be fond of dancing was a certain step towards falling in love" (Austen, J. 1853: 6), thus the reluctance of Darcy to participate in dancing earlier on in the novel marks his limited social availability. However he becomes more available to Elizabeth later on in the novel as Austen presents him as someone whom is interested in being acquainted with Elizabeth and thus he asks her to dance, though even the act of doing this is portrayed as being difficult for him to achieve. The partnership between Elizabeth and Darcy is a stark contrast to that of Jane and Bingley, which Austen develops from the introduction of the two parties - they dance at the first meeting of one another and are thus romantically involved with one another from this point. Mr Bennett is presented by Austen as a man who is interested in the happiness of his daughters, though namely Lizzy, he is rarely phased ...read more.

my share of beauty, but I do not pretend to be anything extraordinary now.", he now finds his only happiness through private study or mocking his wife, referring to her 'nerves' as his 'old friends', with his witty humour being too complex for her to understand and thus not being able to tell when he is using sarcasm. This sarcasm is a trait which Lizzy shares, for example in Chapter 28 when describing Miss De Bourgh, Lizzy states "She looks sickly and cross. Yes, she will do for him very well. She will make him a very proper wife." This use of juxtaposition is rife in Austen's work and is often used for comic effect. Austen uses the juxtaposed relationship between Lizzy and Darcy to present us with an example of marrying for love, rather than superficial reasons which are evident throughout the novel. Examples such as Mr Collins and Charlotte Lucas, or Lydia and Wickham are doomed to fail, or at least to result in the severe unhappiness of the parties involved due to the basis of the relationships being built on financial security or social status. Lizzy and Darcy represent a marriage which ignores the superficial values and focuses on true love, Austen shows us as the reader that this is the only way to have a truly successful and happy marriage to one another and she manages to gain our agreement by portraying the other possible choices throughout the novel. ...read more.