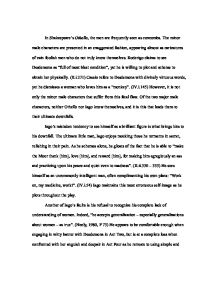 In Shakespeares Othello, the men are frequently seen as coxcombs. The minor male characters are presented in an exaggerated fashion, appearing almost as caricatures of vain foolish men who do not truly know themselves.

In Shakespeare's Othello, the men are frequently seen as coxcombs. The minor male characters are presented in an exaggerated fashion, appearing almost as caricatures of vain foolish men who do not truly know themselves. Roderigo claims to see Desdemona as "full of most blest condition", yet he is willing to plot and scheme to obtain her physically. (II.i.271) Cassio refers to Desdemona with divinely virtuous words, yet he dismisses a woman who loves him as a "monkey". (IV.i.145) However, it is not only the minor male characters that suffer from this fatal flaw. Of the two major male characters, neither Othello nor Iago know themselves, and it is this that leads them to their ultimate downfalls. Iago's mistaken tendency to see himself as a brilliant figure is what brings him to his downfall. The ultimate little man, Iago enjoys mocking those he torments in secret, relishing in their pain. As he schemes alone, he gloats of the fact that he is able to "make the Moor thank [him], love [him], and reward [him], for making him egregiously an ass and practicing upon his peace and quiet even to madness". ...read more.

She reveals Iago's plans and dooms him despite of her love for him. Since it was Iago himself who refused to acknowledge his limited understanding of women, and the fact that goodness truly exists, it is really his lack of self-knowledge that brought his downfall. However, as Neely (1980) states, "even protected as it is from reality, Iago's cynicism has cracks". (P 73) He grudgingly admits that he admires Cassio's "daily beauty", and that it is that particular beauty "that makes [him] ugly". (A5 S1 L21) He aspires for Cassio's job and attempts to relate to Cassio and Othello's love for Desdemona: "now I do love her too". (A2 S1 L313) Though lacking in self-knowledge, Iago has - however minutely - recognized some of his faults. This is the reason Iago's downfall occurs from a lesser height than that of Othello. Othello, on the other hand, possesses a rigid image of himself that shatters and quickly rebuilds without a moments pause to accept the truth. At the beginning of the play, Othello states that he is not requesting Desdemona's presence in Cyprus "to please the palate of [his] appetite, nor to comply with heat (the young affects in [him] defunct) ...read more.

Desdemona is the main cause of his painful self-discovery, and that is why he chooses to end her life to rebuild his self-image. "His conflicts are resolved, his need to idealize and degrade her momentarily reconciled only when he kills her, performing a sacrifice which is also a murder." (Neely, 1980, P 73) He performs the murder, believing that he is on his way to inner peace once again, only to have his newly formed harmony snatched from him when he discovers Desdemona's innocence. This too-late discovery brings Othello to the climax of his despair, and he commits suicide. It is only because Othello's lack of self-knowledge that he felt the need to repair his self-image. In repairing his self-image, he took the step to murder Desdemona. His discovery of her innocence after her death is what brings him to his downfall. In turn, Othello brought upon his own downfall because of his lack of self-knowledge. Within an entire play full of men who do not know themselves, it is Iago and Othello that bring their ultimate demise through lack of self-knowledge. ...read more.