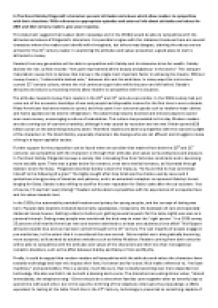 Transfer-Encoding: chunked ﻿In The Great Gatsby Fitzgerald?s characters present attitudes and values which allow readers to sympathise with their situations. With reference to appropriate episodes and external info about attitudes and values for 20th and 21st century readers, give your response. This statement suggests that readers (both nowadays and in the 1920s) would be able to sympathise with the attitudes and values of Fitzgerald?s characters. It is possible to agree with this statement because there are several characters whom the readers can identify with throughout, but others may disagree, claiming the values are too archaic for the 21st century reader. In examining the attitudes and values presented, a good place to start is attitudes to money. Readers from any generation will be able to sympathise with Gatsby and his obsessive drive for wealth. Gatsby idolises the rich, as Nick records: ?the yacht represented all the beauty and glamour in the world.? This rampant materialism causes him to believe that money is the single most important factor in achieving his dreams. Without money there is, ?indiscernible barbed wire,? between him and his ambitions. In many ways this mirrors our current 21st century culture, where the rich continue to get richer while the poor are left behind. ...read more.

Finally, it could be argued that modern readers will sympathise with the attitudes and values the characters have towards technology and how this impacts their lives, for better and for worse. Nick makes reference to, ?intricate machines,? and automobiles. This is a society, much like ours, that is slowly becoming ever more dependent on technology. We also see that it can be both a blessing and a curse. The characters are eating dinner when, ?almost immediately, the telephone rang.? Dinner should be a time when families come together after an eventful day to spend time with each other, but in this case the shrill ring of the telephone interrupts the proceedings: a 1920s equivalent to texting at the table. Much like in the 21st Century, technology is presented as something capable of pulling families apart ? especially since the woman on the phone is Tom?s mistress. How many relationships are ruined today because of instant, 24/7 communication? In light of this remarkable similarity, it perplexes me that anyone could argue that the readers are unable to relate to the attitudes and values of the characters. However, those that oppose my view claim that the attitudes and values of the characters are the antithesis to the true attitudes of the readers, and therefore they are unable to sympathise with their situations. ...read more.

Fitzgerald wrote during the era of the flappers. These were women that shirked traditional feminine ideals and behaved similarly to men, such as smoking and drinking. They cut their hair short, wore short skirts and danced provocatively. Women such as these were not happy with Fitzgerald?s portrayal of women as weak and passive. Likewise in our modern society, more women are employed than ever and are earning historically high wages, even though some issues do remain. The only truly independent female in The Great Gatsby is Jordan, but she is presented as someone who is dishonest and careless. Readers from both the 1920s and modern times will be repulsed by the misogynist attitudes and values that are displayed by some of Fitzgerald?s characters, making us unable to sympathise with them. To conclude, after careful consideration we determine that in The Great Gatsby Fitzgerald?s characters present attitudes and values which allow readers to sympathise with their situations. There may be some instances of conflict but these are outweighed by the amount of attitudes and values that are applicable to readers in both the 1920s and 2010s. The opposing arguments have some merit but ultimately they fail to realise the true implications and context of The Great Gatsby. ...read more.