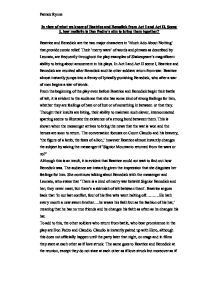 In view of what we know of Beatrice and Benedick from Act I and Act II, Scene I, how realistic is Don Pedro's aim to bring them together?

In view of what we know of Beatrice and Benedick from Act I and Act II, Scene I, how realistic is Don Pedro's aim to bring them together? Beatrice and Benedick are the two major characters in 'Much Ado About Nothing' that provide comic relief. Their 'merry wars' of words and phrases as described by Leonato, are frequently throughout the play examples of Shakespeare's magnificent ability to bring about amusement in his plays. In Act I and Act II scene I, Beatrice and Benedick are reunited after Benedick and the other soldiers return from war. Beatrice almost instantly jumps into a frenzy of lyrically punishing Benedick, who after a war of men begins a war of words. From the beginning of the play even before Beatrice and Benedick begin their battle of wit, it is evident to the audience that she has some kind of strong feelings for him, whether they are feelings of hate or of lust or of something in between or that they. Thought their insults are biting, their ability to maintain such clever, interconnected sparring seems to illustrate the existence of a strong bond between them. This is shown when the messenger arrives to bring the news that the war is won and the heroes are soon to return. ...read more.

'I will do myself the right to trust none; and the fine is, for the which I may go the finer, I will live a bachelor', in turn this casts a shadow of doubt over any forecasts that members of the audience could have made about Beatrice and Benedick being paired up. However, from the beginning it is obvious that Benedick is an entertaining character and unlike his counterparts Don Pedro and Claudio, what he says is not taken especially seriously. Furthermore, at the beginning of Act II Scene I Beatrice also reveals herself as anti-marriage, 'Just if he send me no husband; for which I am upon my knees every morning and evening.' She adds to this statement by stating that she imagines married people go to hell and single people do not, however in addition to this she says, 'he shows me where the bachelors sit, and there live we as merry as the day is long,' this suggests that she hopes to have some kind of fun with bachelors in the future which brings us back to Benedick's belief that he will always remain a bachelor. From the end of Act I and the beginning of Act II Scene I we have learnt that both Beatrice and Benedick possess anti-marriage views, but given that they are both histrionic and insecure characters, nothing can be taken for granted. ...read more.

She is mocking him and saying that his jokes are boring and nobody finds them amusing. I believe that Don Pedro's aim to bring together Beatrice and Benedick is reasonably realistic. There are many times in Act I and Act II Scene I that the thought of the two of them marrying seems almost impossible. For example when Benedick swears he will 'live a bachelor', and when Beatrice is on her knees every morning and evening thanking God that she does not have a husband. However, Beatrice and Benedick are both very melodramatic and provide most of the comedy in the play, this gives the reader the view that what they swear cannot be taken as seriously as for example Claudio. From the beginning of the play, it is obvious that there is a strong bond between them. It appears that the 'skirmish of wit' between them is a cover up for what is a strong bond underneath all the exchanging of criticisms. In act I, Beatrice shows that she thinks about Benedick a lot, by asking the messenger if he has returned from war and by talking almost every time he says something. This also shows in the first scene of Act II when she brings him into the conversation at the masked ball out of the blue. In the end, Don Pedro's plan was a success. ?? ?? ?? ?? Patrick Rynne ...read more.