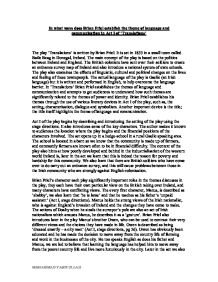 In what ways does Brian Friel establish the theme of language and communication in Act I of 'Translations'.

In what ways does Brian Friel establish the theme of language and communication in Act I of 'Translations' The play 'Translations' is written by Brian Friel. It is set in 1833 in a small town called Baile Beag in Donegal, Ireland. The main concept of the play is based on the politics between Ireland and England. The British colonists have sent over their soldiers to create an ordnance survey map of Ireland and also introduce a national system of state schools. The play also examines the effects of linguistic, cultural and political changes on the lives and feeling of these townspeople. The actual language of the play is Gaelic (an Irish language) but it is written and performed in English, to help overcome the language barrier. In 'Translations' Brian Friel establishes the themes of language and communication and attempts to get audiences to understand how such themes are significantly related to the themes of power and identity. Brian Friel establishes his themes through the use of various literary devices in Act I of the play, such as, the setting, characterisation, dialogue and symbolism. Another important device is the title; the title itself highlights the theme of language and communication. Act I of the play begins by describing and introducing the setting of the play using the stage directions. It also introduces some of the key characters. ...read more.

The invasion of the English language is robbing Ireland of its roots, its culture, and the etymological meanings of area names are being taken away, lost forever. One culture is being taken over by another unwelcome culture; this is the cause of the decline of the Irish language. We are also introduced to Sarah, who is a mute, she "has a speech defect...considered locally to be dumb". Brian Friel uses her character to foreground the most basic form of verbal communication. There is obviously a difficulty in Sarah presenting her opinions and views, but Manus and the other characters obviously have found away around this and are able to interpret her signs and grunts as an attempt to communicate. If Ireland was to become a completely English speaking country all the people around her would also be as 'clueless' to speaking as she is, as we see in the play the Irish characters find it hard to pronounce the foreign sound of English words. The character of Sarah is used as a device to symbolise Ireland being unable to speak English, and being seen as "dumb" in the eyes of the English-speaking. Manus is teaching her the mechanics of speech and the production of sound, he is helping her overcome this barrier of not being able to communicate with others verbally. It would obviously be a massive achievement for her and Manus recognises this he is very encouraging. ...read more.

He is rather patronising, when addressing the Irish 'he speaks as if he were addressing children - a shade too loudly' (Act I, stage directions, pg 32). He represents the ignorant English, those who do not attempt at all to try and sympathise and communicate no more than necessary with the local people. He obviously considers English as a language which has great power and authority. There is a lack of communication between him and the Irish, as he uses a translator. Also although he is a learned and educated man, he does not understand the well valued elitist languages of Latin and Greek which Hugh finds to be quite laughable. In conclusion, Brian Friel uses a wide variation of devices to get his many complex and intertwining themes and views across to the audience. There are many underlying ideas and also some obvious strong nationalist views. Each of the characters play significant roles in presenting the ideas, the are all very individual in their views and so Brian Friel is able to cover every view point. We are able to sympathise with the characters, but it is not strongly biased in favour of the Irish as we can easily see the need for the introduction of the English language. Obviously no single viewpoint can be termed as correct, and Brian Friel is able to appreciate this in his play. In Act I Brian Friel uses these devices extensively to introduce his themes which are worked and built upon in the rest of the play. MOHAMMAD YASIN ULLAH ...read more.