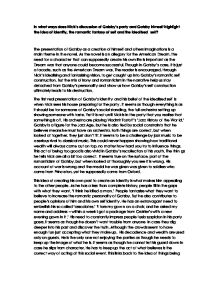 In what ways does Nicks discussion of Gatsbys party and Gatsby himself highlight the idea of identity, the romantic fantasy of self and the idealised self?

In what ways does Nick's discussion of Gatsby's party and Gatsby himself highlight the idea of identity, the romantic fantasy of self and the idealised self? The presentation of Gatsby as a creation of himself and others imaginations is a main theme in the novel. As the novel is an allegory for the American Dream, the need for a character that can supposedly create his own life is important as the Dream was that anyone could become successful. Though in Gatsby's case, it is just a facade, such as the American Dream was. The reader is encouraged, through Nick's idealising and fantasising vision, to get caught up into Gatsby's romantic self construction. But the mix of irony and romanticism in the narrative help us stay detached from Gatsby's personality and show us how Gatsby's self construction ultimately leads to his destruction. The first real presentation of Gatsby's identity and his belief of the idealised self is when Nick sees his house preparing for the party. It seems as though everything is as it should be for someone of Gatsby's social standing, the full orchestra setting up showing someone with taste. ...read more.

Although the crowds seem to have enough fun just accepting what they make up. His decadence and wealth are used only on guests. He is the only one not enjoying the parties as though he needs to keep up the image of what he is. It seems as though he cannot let his guard down in case he slips from character. He has to keep up the act of what believes is the correct way of acting at this social event. This links back to the idea of things being too perfect. 'Want to go with me, old sport?' Although he doesn't know Nick, he uses 'old sport' as he believes it is the correct gesture to use. Whereas someone who was actually brought up in that social class would know that he is using it in the wrong place. When Nick talks about New York after the party it fills the role of Gatsby as America in character. The 'racy, adventurous feel' embodies Gatsby, yet Nick also sees underneath it. 'At the enchanted metropolitan twilight I felt a haunting loneliness sometimes, and felt it in others.' This vibrant character with a lonely undercurrent sums up Gatsby. ...read more.

This party image of himself was to impress Daisy, but he cannot keep it up. Gatsby's main strength, being able to create the idealised version of himself is his main weakness as well. As he wants to be socially acceptable in the class he believes he fits into he follows all their customs. Though as he also needs to fit in to the social order of the current period he follows all the aspects of the Jazz Age culture. These two things are perfectly acceptable by themselves, yet he tries to fit into both and fails by using social norms from each class, at the same time. Coupled with this, as he is not originally from either social class, he gets things wrong. Using the rhetoric of the upper class, but not in context, though appears good, is a glaring mistake and obvious that he is not originally from that class. Also his lack of true identity aids increasing people's views of him. No history means they can fantasise about his past, increasing their romantic view of him. Gatsby aids this by acting as the suave American that he does. This image of Gatsby as new America while Tom is the traditional, staid, 'old money' America with conflicting romantic ideals was an allegory for America at the time. ...read more.