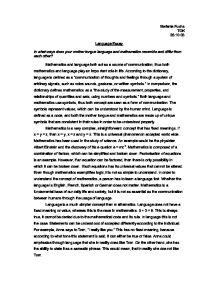 In what ways does your mother tongue language and mathematics resemble and differ from each other?

Stefanie Fuchs TOK 28.10.03 Language Essay In what ways does your mother tongue language and mathematics resemble and differ from each other? Mathematics and language both act as a source of communication, thus both mathematics and language play an important role in life. According to the dictionary, language is defined as a "communication of thoughts and feelings through a system of arbitrary signals, such as voice sounds, gestures, or written symbols." In comparison, the dictionary defines mathematics as a "the study of the measurement, properties, and relationships of quantities and sets, using numbers and symbols." Both language and mathematics use symbols, thus both concept are seen as a form of communication. The symbols represent values, which can be understood by the human mind. Language is defined as a code, and both the mother tongue and mathematics are made up of unique symbols that are consistent in their rules in order to be understood properly. ...read more.

Whether the language is English, French, Spanish or German does not matter. Mathematics is a fundamental base of our daily life and society, but it is not as essential as the communication between humans through the usage of language. Language is a much simpler concept than mathematics. Language does not have a fixed meaning or value, whereas this is the case in mathematics. 5 + 3 = 8. This is always true, it cannot be denied due to the mathematical code and its rule. In language this is not the case. Statements can be understood of accepted differently according to the individual. For example, Anna says to Tom, "I really like you." This has no fixed meaning, because according to what tone this statement is said, it can either be true or false. ...read more.