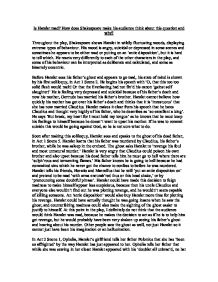 Is Hamlet mad? How does Shakespeare make his audience think about this question and why?

Is Hamlet mad? How does Shakespeare make his audience think about this question and why? Throughout the play, Shakespeare shows Hamlet in wildly fluctuating moods, displaying extreme types of behaviour. His mood is angry, suicidal or depressed in some scenes and sometimes he appears to be either mad or putting on an 'antic disposition', but it is hard to tell which. He reacts very differently to each of the other characters in the play, and some of his behaviour can be interpreted as deliberate and calculated, and some as bizarrely eccentric. Before Hamlet sees his father's ghost and appears to go mad, his state of mind is shown by his first soliloquy, in Act 1 Scene 2. He begins his speech with 'O, that this too too solid flesh would melt! Or that the Everlasting had not fix'd his canon 'gainst self slaughter!' He is feeling very depressed and suicidal because of his father's death and now his mother, Gertrude has married his father's brother. Hamlet cannot believe how quickly his mother has got over his father's death and thinks that it is 'incestuous' that she has now married Claudius. Hamlet makes it clear from his speech that he hates Claudius and thought very highly of his father, who he describes as 'so excellent a king'. He says 'But break, my heart for I must hold my tongue' as he knows that he must keep his feelings to himself because he doesn't want to upset his mother. If he was to commit suicide this would be going against God, so he is not sure what to do. Soon after making this soliloquy, Hamlet sees and speaks to the ghost of his dead father, in Act 1 Scene 5. Hamlet learns that his father was murdered by Claudius, his father's brother, while he was asleep in the orchard. The ghost asks Hamlet to 'revenge his foul and most unnatural murder.' ...read more.

He is probably beginning to become frustrated with himself and has doubts about whether he is capable of killing Claudius. Part of the reason he is having doubts is that he believes 'conscience does make cowards of us all,' he wants to get revenge for his father's murder but realises that if he gets revenge it will make him almost as bad as Claudius himself. Hamlet knows that he has gone too far now with his antic disposition to go back on it and he knows he has to take action soon, so he is probably worried about whether he will get found out or if anything will go wrong. In this speech Shakespeare shows that Hamlet's behaviour does not portray signs of madness because he seems in control and knows what he is doing. This speech is a soliloquy, so it is much more likely that he is telling the truth when he is on his own, because there wouldn't be much point in lying to himself and there is no one else there for him to be lying to. Towards the end of his speech, Hamlet sees Ophelia and this distracts him. When Hamlet speaks to Ophelia he seems almost out of control and as if he does not know what he is doing so he upsets her even more. Hamlet could have been taking his anger and frustration out on Ophelia because he knew that she was much weaker and more sensitive than him, so by upsetting her it made him feel better and gave him more power over her. Hamlet is very rude to Ophelia and tells her 'I loved you not' and 'get thee to a nunnery'. In those days 'nunnery' had very different meanings, so this could be interpreted in more than one way. If he had meant a home for nuns, he might have told her to go so that no other man could get his hands on her. ...read more.

Ophelia's thoughts are shown to be very muddled and make no sense, while Hamlet has completely normal thought processes. Hamlet understands his situation and what he must do. The strongest evidence that Hamlet is really sane is in his soliloquies, because when he is talking to himself and the audience, there is no other character there for him to be lying to, or putting on an 'antic disposition' in front of . Hamlet is shown to be very philosophical and contemplative when he makes these speeches and seems very in control, so I think this proves that he was not really mad. At the end of the play, Hamlet actually seems more sane than he has in the rest of the play, and this is also a sign that Hamlet was not really mad, because if he was, it would be most likely that he would get more and more insane as the play goes on, and be the worst at the end. This could be because by the end of the play, Hamlet was not scared of death anymore, and had decided that he was finally going to take action, instead of getting more and more frustrated with himself. He also makes sarcastic comments to people to annoy them when he is fencing Laertes. Shakespeare uses the theme of Hamlet's madness to build up tension and suspense in the play, and this keeps the audience wondering and guessing what will happen next. The audience are kept entertained because Hamlet's state of mind changes so dramatically from scene to scene. Shakespeare has placed scenes where Hamlet appears mad and scenes where he appears sane very close together, so that the audience will keep changing their opinion about whether he really is mad. The theme of madness is one which a lot of people find very interesting, because it is not understood, and so the audience do not know how Hamlet is going to react in each different situation. Shakespeare also uses the theme of madness to make the audience question what madness actually is, and what makes a person go mad. ...read more.