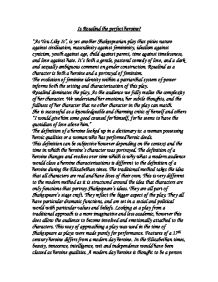 Is Rosalind the perfect heroine?

Is Rosalind the perfect heroine? "As You Like It", is yet another Shakespearian play that pities nature against civilisation, masculinity against femininity, idealism against cynicism, youth against age, child against parent, time against timelessness, and love against hate. It's both a gentle, pastoral comedy of love, and a dark and s******y ambiguous comment on gender construction. Rosalind as a character is both a heroine and a portrayal of feminism. The evolution of feminine identity within a patriarchal system of power informs both the setting and characterization of this play. Rosalind dominates the play. As the audience we fully realise the complexity of her character. We understand her emotions, her subtle thoughts, and the fullness of her character that no other character in the play can match. She is successful as a knowledgeable and charming critic of herself and others "I would give him some good counsel for himself, for he seems to have the quotidian of love above him." The definition of a heroine looked up in a dictionary is: a woman possessing heroic qualities or a woman who has performed heroic deeds. This definition can be subjective however depending on the context and the time in which the heroine's character was portrayed. The definition of a heroine changes and evolves over time which is why what a modern audience would class a heroine characterisations is different to the definition of a heroine during the Elizabethan times. ...read more.

This is quite ironic as Rosalind is herself a female and the fact that at some points during the play, she puts females down is due to the fact that she's trying to act like a man and the men at the time had these types of approach and attitudes towards females. In my opinion she's not acting the way she does to put women down, but to show the audience how ridiculous it is for men to behave that way towards women and to introduce dramatic irony into the play. In my opinion Rosalind is a perfect heroine, however like any character or any other human being she has fatal flows which in this case has been sheltered by her virtues of character. I completely agree with Bloom on his describing of Rosalind. He also says that she's "harmoniously balanced and beautifully sane", which again I consent with. However he says that Rosalind is not interested in the power that her wit brings her. I think that Rosalind as a character is well aware of the power that she has as Ganymede and the power that her wit brings her. I do also think that she's interested in the power that being dressed as a man gives her and she enjoys using that supremacy. ...read more.

I think that Shakespeare did this to show the audience that things like antifeminism had to be established and dealt with properly. I think that Shakespeare wanted to bring to light the fact that it wasn't good enough that Rosalind did all the things that she did, as at the end of the day, Orlando had more power over her and he was in control and she dedicated herself to him. Shakespeare was telling the women n the audience that they would never have rights if they didn't stick up for themselves and if they didn't manage to get feminism established. Shakespeare transforms Rosalind's character throughout the play. From a love struck powerless girl to a dignified, aloof woman who managed to manipulate and influence other characters like Orland (the hero) and Phebe (Ganymede's lover). Rosalind becomes a very sardonic, scathing and witty character to show that women can be as derisive and satirical as men if they were given the opportunity to be. She fulfils a very important role and a very significant dramatic function. Then he allows her to mould back to her original, immobilized character to show that there had to be a vital change in society otherwise women are never going to get the respect that they truly deserve if the society wasn't revolutionised and modified.. ...read more.