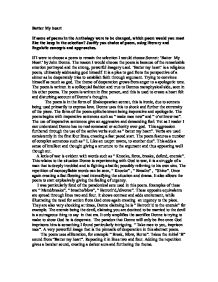 Batter My heart If some of poems in the Anthology were to be changed, which poem would you most like the keep in the selection? Justify you choice of poem, using literary and linguistic concepts and approaches. If I were to choose a poem to remain the selection I would choose Sonnet: 'Batter My Heart' by John Donne. The reason I would choose the poem is because of the remarkable emotion portrayed and the strong, powerful imagery used. 'Batter my heart' is a religious poem, ultimately addressing god himself. It is a plea to god from the perspective of a sinner as he desperately tries to establish faith through argument. Trying to convince himself as much as god. The theme of desperation grows from anger to a apologetic tone. ...read more.

Verbs are used consistently in the first four lines, creating a fast paced start. The poem features a number of complex sentences such as " I, Like an usuprt towne, to another due". This adds a sense of intellect and thought giving a structure to the argument and thus appearing well though out. A lexis of war is evident with words such as " Knocke, force, breake, defend, enemie". This relates to the situation Donne is experiencing with God to war, it is a struggle of a man that is deeply troubled and is fighting a battle; possibly referring to his own sins. The repetition of monosyllabic words can be seen, " Knocke" , " Breathe" , "Shine". Once again creating a fast flowing read intensifying the situation and drama. ...read more.

The poem uses alliteration, for example " Break, Blow, Burne". Takes the initial 'B" sound from "Batter my heart". Repeating it in lines two and four. Adding the repetition gives a harsher sound, creating a darker aura and furthering the theme. The last line could be perceived as inappropriate or untasteful. " Nor even chaste, except you ravish mee". The image of r**e in the final line is a exceptionally strong conclusion. It is a remarkable comparison of Donne's relationship with God. And shows the reader perfectly the mental state of which Donne is in. He has sinned to a point and created so many barriers in the way of his faith that only God can save him now, and must act. The reason I chose to keep this selection is for Donne's use of logical argument while visiting the extremes of emotional boundaries, creating a haunting struggle, through imagery and violent language of a very troubled man. ...read more.