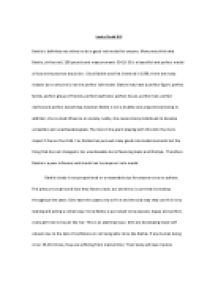 Looks Could Kill. Barbie is definitely too skinny to be a good role model for anyone.

﻿Looks Could Kill Barbie is definitely too skinny to be a good role model for anyone. Many may think that Barbie, six feet tall, 100 pounds and measurements 39-19-33 is a beautiful and perfect model of how every woman should be. Since Barbie was first invented in 1959, there are many reasons as to why she is not the perfect role model. Barbie may have a perfect figure, perfect family, perfect group of friends, perfect boyfriend, perfect house, perfect hair, perfect clothes and perfect everything, however Barbie is not a healthy and proportional being. In addition, she is a bad influence on society. Lastly, she causes many individuals to develop unrealistic and unachievable goals. The more time spent playing with this doll, the more impact it has on the child. Yes, Barbie has pursued many good role model moments but the thing that has not changed is her unachievable but influencing looks and lifestyle. Therefore Barbie is a poor influence and should not be anyone?s role model. ...read more.

Out of the 89-90% there are 80% of them that are under the age of twenty. Some of this population started to worry about their size and weight ever since the age of four. Many of these girls have an eating disorder. Some have openly admitted that Barbie has played a huge role as their role model. This means that Barbie is portraying a bad image and is a horrible influence. In order to lose weight, many people look to dieting as an option. Diets are not a bad thing and many humans around the world go through phases of life where dieting is a healthy option. However, if a child at the age of four is going on a diet, it affects their growth and bodily function. Some kids not only go on diet but may starve themselves or become bulimic. Doing so may cause other dangerous side effect. Many may also induce self harm because they still feel that they are not skinny enough. ...read more.

A girl named Sarah Burge in the UK did exactly like so. She spent one million dollars to live the Barbie life. Even though it is achievable it is extremely hard to maintain such a lifestyle. Therefore, Barbie influences society to make unrealistic and unachievable goals and is not a good role model. Barbie should not be a role model to anyone. Barbie is a bad influence and does not have a positive effect on others. Barbie is not a healthy and proportional being which causes girls that can?t achieve her look to have low self esteem. In addition, she has a bad influence on society and causes many eating disorders and self harming victims just from trying to look and be like her. Lastly, she causes many individuals to develop unrealistic goals and become bankrupted from just trying to achieve her way of life. This doll may be perfect in the plastic world but brought into real life she would die. Barbie and many other dolls is not a beneficial figure to look up to as a role model. ...read more.