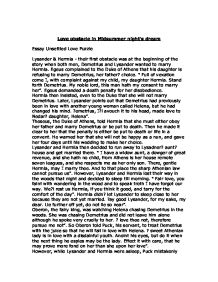 Love obstacle in Midsummer night's dream Essay Unsettled Love Puzzle Lysander & Hermia - their first obstacle was at the beginning of the story when both men, Demetrius and Lysander wanted to marry Hermia. Egeus complained to the Duke of Athens that his daughter is refusing to marry Demetrius, her father? choice. " Full of vexation come I, with complaint against my child, my daughter Hermia. Stand forth Demetrius. My noble lord, this man hath my consent to marry her". Egeus demanded a death penalty for her disobedience. Hermia then insisted, even to the Duke that she will not marry Demetrius. Later, Lysander points out that Demetrius had previously been in love with another young woman called Helena, but he had changed his mind. ?emetrius, I?l avouch it to his head, made love to Nedar? daughter, Helena". Theseus, the Duke of Athens, told Hermia that she must either obey her father and marry Demetrius or be put to death. Then he made it clear to her that the penalty is either be put to death or life in a convent. He warned her that she will not be happy as a nun, and gave her four days until his wedding to make her choice. Lysander and Hermia then decided to run away to Lysadner? aunt? house and get married there. " I have a widow aunt, a dowger of great revenue, and she hath no child, from Athens is her house remote seven leagues, and she respects me as her only son. ...read more.

?emetrius my consent to marry her". Demetrius and Helena? other love obstacle was when Oberon told Puck to put the juice in Demetrius' eyes, so that he will love Helena, who was chasing him in the woods. So Puck goes and mistakenly applies the juice to Lysander? eyes, thinking he was Demetrius. ?eeds of Athens he doth wear. This is he, my mater said". After he did so, Helena was left behind and couldn? keep up with Demetrius. She saw Lysander lying on the ground and thought he may be wounded or dead. ?ut who is here? Lysander, on the ground, dead or asleep? I see no blood, no wound. Lysander, if you live, good sir awake". She tried waking him up and as he woke up the first creature he saw was Helena. The result of Puck? mistake is that Lysander now falls in love with Helena instead of Demetrius loving Helena. Helena couldn? believe it and thought that it was done to make fun of her. Oberon was not pleased when he realises that Puck has put the juice on the wrong lover? eyes. ?hat hast thou done? Thou hast mistaken quite, and laid the love juice on some true-love? sight". Oberon sends Puck again to bring Helena and apply the juice on Demetrius' eyes. ?bout the wood go swifter than the wind, and Helena of Athens look thou find". ...read more.

?tand forth, Demetrius. My noble lord, this man hath my consent to marry her. Stand forth, Lysander. And my gracious duke, this man hath bewitched the bosom of my child". It was interrupted when Egeus complained to the Duke of Athens, that his daughter is refusing to marry Demetrius, her father? choice. Theseus told Hermia that she must either obey her father and marry Demetrius or be put to death. He cannot make her change her decision, and told her the penalty is either death or life in a convent. He warned her that she will not be happy as a nun, and he gave her four days until his own wedding to make her choice. ?ake time to pause, and, by the next new moon, the sealing-day betwixt my love and me". On Midsummer Day, Theseus, Hippolyta and Egeus were out early in the forest to celebrate Midsummer Day and to go hunting. Theseus proudly shows off his hounds to his fiancee. They suddenly saw the four lovers on the ground asleep, and woke them up. Egeus was furious when he found out that Lysander and Hermia had planned to elope, but Demetrius declared his love for Helena. So Theseus, realising that the couples are now happily paired, and he decided that this is the right outcome. He announced that all three couples shall be married at a triple ceremony. ...read more.