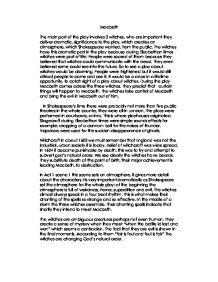 Macbeth The main part of the play involves 3 witches, who are important they deliver dramatic, significance to the play, which creates an atmosphere, which Shakespeare wanted, from the public. The witches have this dramatic part in the play because during Elizabethan times witches were part of life: People were scared of them because they believed that witches could communicate with the dead. They even believed some could see into the future. So to see a play about witches would be alarming. People were frightened but it would still attract people to come and see it. It would be a once in a lifetime opportunity, to catch sight of a play about witches. During the play Macbeth comes across the three witches. They predict that curtain things will happen to Macbeth. The witches take control of Macbeth and bring the evil in Macbeth out of him. In Shakespeare's time there were probably not more than five public theatres in the whole country, they were all in London. The plays were performed in courtyards, or inns. This is where playhouses originated. Stagecraft during Elizabethan times were simple sounds effects for example: dropping of a cannon- ball for the noises of thunder. Trapdoors were used for the sudden disappearance of ghosts. Witchcraft in about 1603 we must remember that England was not the industrial, urban society it is today. ...read more.

Macbeth insists that the witches explain how they know these things. But the witches vanish as abruptly as they came. What they do to him however is reminiscent of Macbeth's future condition "dry as hay". Macbeth and Banquo briefly discuss the "insane" revelations they have just heard. When Macbeth gets told that he will be Thane of Cawdor. Macbeth and Banquo are both amazed and we begin to see Macbeth ambition unfolding through the scenes that he delivers to the audience. Banquo warns of the danger of trusting such supernatural messages, but Macbeth is lost in these own thoughts, thinking through all the implications. Eventually, he is stirred and agrees to ride towards the king. In private to Banquo he suggests they speak about the revelations at some future point, which Banquo agrees to. Banquo warning to Macbeth concerning the "instruments of darkness" might also be construed. Macbeth is betrayed as a result of believing these "truths", and he comes to realise this in his final confrontation with Macduff. The beginning shows that Macbeth all too quickly, following his accession as Thane of Cawdor, and begins that process of imagining the steps he will need to take that is murdering King Duncan to become King. At this point the real horror of doing the deed seems to be balanced by a morbid fascination at its prospect. During the production clothing was a significant because clothing is a powerful image suggesting concealment and disguise. ...read more.

He then presses them for more information about Banquo's children and is mortified to see a vision of eight kings all descended from Banquo, who also appears. The witches suddenly vanish and Macbeth curses them. Lennox appears and informs Macbeth that Macduff has fled to England. Macbeth determined to kill Macduff's wife and children as a reprisal. Earlier uncertainties have been stripped way away. Before, the witches informed him of the prophecies: now he demands of them what he wants to know. He even threatens the powerful master spirits with a curse if they do not answer him. And when he leaves, there is no more agonising about what he needs to do- or discussing the situation with his wife- Macduff castle is to be attacked. An incidental point here is the depths to which Macbeth has fallen in murdering, without any compunction, women and children. One consequence of his visit is that certainty of "security" which has troubled Macbeth from the outset. One factor is establishing the trust worthiness of the prophecies in Macbeth's mind is the speed with which they a happen "Cawdor" followed immediately upon their pronunciation of it, now, having been told to watch out for Macduff, Lennox appears with the same warning. Of course the "irony" is that all the prophecies are double- edged and turn against him. Banquo comment accurately reflects the truth: "The instruments of darkness of darkness tell us truths:/ Win us with honest trifles, to betrayer's / in deepest consequence". These words are prophetic and an indictment of all that Macbeth comes to believe. ...read more.