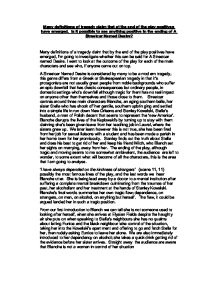 Many definitions of tragedy claim that at the end of the play positives have emerged. Is it possible to see anything positive in the ending of A Streetcar Named Desire?

Many definitions of tragedy claim that at the end of the play positives have emerged. Is it possible to see anything positive in the ending of A Streetcar Named Desire? Many definitions of a tragedy claim that by the end of the play positives have emerged, I'm going to investigate whether this can be said for A Streetcar named Desire. I want to look at the outcome of the play for each of the main characters and see who, if anyone came out on top. A Streetcar Named Desire is considered by many to be a modern tragedy, this genre differs from a Greek or Shakespearian tragedy in that it's protagonists are not usually great people from noble backgrounds who suffer an epic downfall that has drastic consequences but ordinary people, in domestic settings who's downfall although tragic for them has no real impact on anyone other than themselves and those close to them. Streetcar centres around three main characters Blanche, an aging southern belle, her sister Stella who has shook off her gentile, southern upbringing and settled into a simple life in run down New Orleans and Stanley Kowalski, Stella's husband, a man of Polish decent that seems to represent the 'new America'. ...read more.

It is clear though that Stella isn't stupid, Williams has given Stella an air of maturity and quiet composure that is in great contrast to Blanche's manner. I find it hard to believe that she could completely dismiss Blanche's claim that Stanley raped her as just her desperate last attempt to get Stanley out of the picture. I feel that on some level she believes her sister, in scene 11 she says to Eunice; 'I don't know if I did the right thing' (11,12) And; 'I couldn't believe her story and go on living with Stanley' (11,15) Eunice replies; 'Don't ever believe it. Life has to go on. No matter what happens, you've got to keep on going' (11,17-18) It is pointedly never said that she is doing the right thing, only that she is doing what she has to do. Stella 'sobs with inhuman abandon' as blanch is being led away, betraying her real feelings even more than the text, she is devastated to see her sister in this situation and no doubt feels hugely guilty for allowing it. In my opinion Stella made the decision to side with Stanley out of what she thought was necessity, she couldn't bare the thought of losing the security that Stanley ...read more.

Sparknotes on A Streetcar Named Desire agree that many of his female characters contain elements of his mother and sister and his male characters were based on his brutish father and childhood bullies (SparkNotes Editors. "SparkNote on A Streetcar Named Desire." SparkNotes LLC. 2003. http://www.sparknotes.com/lit/streetcar/ (accessed February 24, 2011).) It seems to me that Streetcar in particular does support this theory, as does The Glass Menagerie. Maybe Streetcars ending was simply Williams alluding to the fact that in real life, there is not always a happy ending, we don't always come away having learned something of even with a brighter outlook for the future, so why should the characters in his play. To conclude, I can't say that any positives have emerged from the ending of Streetcar, but I do not believe that this detracts in any way from the play being one of the great modern tragedies. Williams' talent for creating believable characters his audience form attachments too is illustrated in the compulsion we feel to cultivate our own conclusions, and fill in the blanks that he didn't. This only added to my enjoyment of reading the play and I can only assume, from the plethora of different interpretations of the text I read on the internet when researching for this piece, that I am not the only person to feel this way. ...read more.

The essay sets out well and some valid discussion points are raised, concerning the interaction of the characters . However, the essay writer loses his/her way and gets caught up in irrelevant biographical detail and general comments. The conclusion has little relationship to the aims set out in the introductions.

Paragraph construction is generally well managed. Sentence construction is loose in places and punctuation is frequently faulty. Lexis is mostly adequate for the task but there are some errors in word formation.