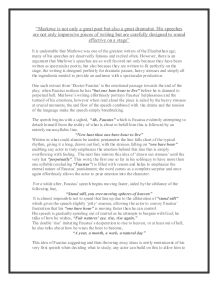 &quot;Marlowe is not only a great poet but also a great dramatist. His speeches are not only impressive pieces of writing but are carefully designed to sound effective on a stage&quot;

"Marlowe is not only a great poet but also a great dramatist. His speeches are not only impressive pieces of writing but are carefully designed to sound effective on a stage" It is undeniable that Marlowe was one of the greatest writers of the Elizabethan age; many of his speeches are deservedly famous and recited often. However, there is an argument that Marlowe's speeches are so well favored not only because they have been written as spectacular poetry, but also because they are written to fit perfectly on the stage, the writing is designed perfectly for dramatic pauses, heavy stresses and simply all the ingredients needed to provide an audience with a spectacular production. One such extract from 'Doctor Faustus' is the emotional passage towards the end of the play, when Faustus realizes he has "but one bare hour to live" before he is damned to perpetual h**l. Marlowe's writing effortlessly portrays Faustus' helplessness and the turmoil of his emotions, however when read aloud the piece is aided by the heavy stresses at crucial moments, the and flow of the speech combined with the drama and the tension of the language make the speech simply breathtaking. ...read more.

at least out of h**l, he also talks about how he wises the hour to become, "A year, a month, a week, a natural day" This idea of Faustus suggesting and then throwing away ideas is eerily reminiscent of his very first speech when deciding what to study; any actor can build on this to allow him to draw the idea of a year and then throw it away, speeding up the process to increase the sense of desperation. Faustus then lurches into Latin, which very few people in any audience would understand, even and Elizabethan audience. This still gives Faustus the persona of a very learned individual, something which the audience may have forgotten whilst watching Faustus embarrass himself during the middle of the play and whenever he was given a chance to repent. "O lente, lente currite noctis equi!" He cries, begging 'night's horses' to slow down and not to bring the morning, the fact that Faustus has reverted to mythical creates now once again proves to any audience member who does speak Latin that Faustus is extraordinarily desperate. ...read more.

devoted to a simple, "No, no:" After he asks the hills to fall on him and hide him from the "heavy wrath of God" the 'no's are packed with emotion, creating a break in the rhythm of the speech and creating pauses, slowing the pace of the soliloquy and allowing an actor to place a break in his voice. The way Marlowe writes makes it easy for any person to read the speech and be able to pour emotion into it, with barley any effort at all. The langue itself is full of techniques such as personification, Faustus talks about how he wishes the cloud to "vomit forth into the air" creating vivid imagery and the harsh consonant sounds followed by soft vowels almost creates the image itself when spoken. In conclusion, it does seem obvious that Marlowe has written Doctor Faustus with the objective of creating as much impact on stage as possible. The sounds, stresses and imagery add to the ebb and flow of the language, truly making Marlowe one of the greatest playwrights of the Elizabethan age. ?? ?? ?? ?? ...read more.

The essay's strength is its attempt to focus closely on language, using a range of appropriate technical terms. However, the writer often struggles to give clear expression to the effects of language use, both poetical and dramatic.
In addition, it is very important to think carefully about what an essay question is asking you to do. Here the essay title requires exploration of more than one speech. This essay focuses on the final speech only, and strangely stops half way through the speech, omitting comment on some of the most dramatic and moving lines of the play.
**