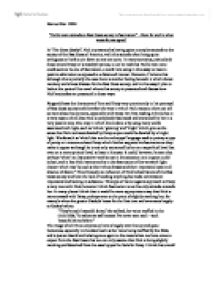 &quot;Nick's main attitude to East Coast society is fascination&quot; - How far and in what ways do you agree?

"Nick's main attitude to East Coast society is fascination" - How far and in what ways do you agree? In "The Great Gatsby", Nick is presented as having quite a complex attitude to the society of the East Coast of America, with this attitude often being quite ambiguous or hard to pin down at any one point. In many scenarios, particularly those around Daisy or at Gatsby's parties, it can be read that Nick's main tone could seem to be one of fascination, a word I am using in this essay to mean a positive admiration as opposed to a distanced interest. However, I believe that although this is partially the case there is another feeling beneath it which shows mockery and almost distaste for the East Coast society, and in this essay I plan to look at the parts of the novel where this society is presented and discuss how Nick's attitudes are presented in these ways. Fitzgerald uses the characters of Tom and Daisy very prominently in his portrayal of East Coast society and therefore the way in which Nick reacts to them can tell us more about his opinions, especially with Daisy. ...read more.

'"They're such beautiful shirts," she sobbed, her voice muffled in the thick folds, "It makes me sad because I've never seen such - such beautiful shirts before." The image which Nice conjures up here is hugely over the top and quite humorous, especially in the detail such as her voice being muffled by the folds, and is just so absurd and relating once again to the materialism we have come to expect from the East Coast that we can only assume that Nick is being slightly mocking and detached from the usual appeal he feels for Daisy. I think that overall although it is very certain that Nick is definitely 'fascinated' by Daisy and the way in which society has conditioned to act, the hints of mockery within the way in which he talks about her leads me to believe that he is also quite detached from her as well, possibly due to the fact that he is from the Mid-West and would therefore find it more difficult to integrate with her way of life. ...read more.

sees this as something also very unstable and aloof with no real care who you are with or what you are talking about but just a very fluid and lazy drifting which is representative of the impersonality of the society of the East Coast. Again I feel that in places, Nick is mocking of the extravagance and absurdity of some of the situation as well. For example when he is talking about the preparations for the party he describes the orchestra as "no thin five piece affair, but a whole pitful of oboes and trombones and saxophones and violas and cornets and piccolos, and low and high drums". This long list really sounds over the top and ridiculously excessive and this is further heightened by the polysyndeton which gives a bit of a repetitive and almost boring feel to what is probably actually a very high quality orchestra. I think that this mocking once again slightly detaches Nick from the action despite his being swept in, and once again we see him as both fascinated but also detached and mocking. ?? ?? ?? ?? Harriet Blair 12EM ...read more.