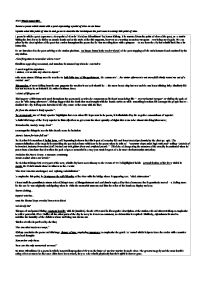 25/25 Word count 807 Choose a poem which deals with a poet expressing a point of view on an issue. Explain what this point of view is and go on to describe the techniques the poet uses to convey this point of view. A poem in which a poet expresses a clear point of view is "No More Hiroshimas" by James Kirkup. It is narrated from the point of view of the poet, as a tourist visiting the first city to be hit by an atomic b**b and as the style of the title suggests, it serves as a warning to nuclear weapons ever being used again. We can gather by the clear opinion of the poet that carries throughout the poem that he was traveling there with a purpose - to see how the city has rebuilt itself since its destruction. We are introduced to the poet arriving at the station platform. An image forms in the reader's head of the poet stepping off the train bemused and confused by the busy station. ...read more.

Kirkup also introduced the city centre of the town with the line; "far from the station's lively squalor". The oxymoronic use of 'lively squalor' highlights that even when life is present in the poem, it is diminished by the negative connotations of 'squalor'. To build this image of the lively squalor he lists adjectives to get across the sheer quantity of sights that seem to be almost attacking his senses ; "Ramshackle, muddy, noisy, drab" In amongst the things he sees in this chaotic scene he includes: "Atomic lotion for hair fall out" The fact that it is mentioned in list form, as if in passing is shows that this is part of everyday life and is not treated preciously by the city's people. The commercialisation of the tragedy is something the poet takes issue with later in the poem when he tells of "souvenir shops piled high with junk" selling "Models of the bombed Industry Promotion Hall Tricked out with glitter-frost and artificial pearls." ...read more.

stopped watches... pants the blasted boys crawled home in to bleed And slowly die" This spaced and paused listing contrasts heavily with the jumbled, chaotic effect used in his negative description of the station exit and allows Kirkup to emphasise the relics' powerful effect. Unlike all the other parts of the city he sees, he leaves no comment, no elaboration is required. Similarly, enjambment is used to underline the brutality of the children whose suffering was drawn out. This list of relics is prefixed by the line; "The ones that made me weep;" Kirkup concludes the poem and this huge change of tone employing assonance to emphasise the gentle 'ee' sound which helps to leave the reader with a somber mood and thought: "Remember only these. These are the only memorials we need" 'No More Hiroshimas' is a poem in which James Kikup's point of view on the issue of nuclear warfare is made clear. The greatest tragedy and the most horrific lasting effect seems to be that once cities have been erased, they can be rebuilt physically but their spirit is forever gone. ...read more.