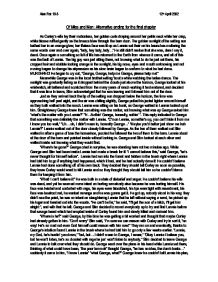 Of Mice and Men: Alternative ending for the final chapter.

Of Mice and Men: Alternative ending for the final chapter As Curley's wife lay their motionless, her golden curls draping around her petite neck while her crisp, white blouse ruffled gently as the breeze blew through the barn door. The golden sunlight of the setting sun bathed her in an orange glow; her lifeless face was lit up as Lennie sat their on his haunches muttering the same words over and over again, "lady, hey lady, lady..." He still didn't realise that she was, dare I say it, dead. Once again a something so full of life has returned to the Earth from whence it came, and all of this was the fault of Lennie. The big guy was just sitting there, not knowing what to do he just sat there, his cropped hair and stubble looking orange in the sunlight, his big nose, eyes and mouth unknowing and not moving began to change his expression as his slow brain began to conform to what he had done. MURDERED! He began to cry out, "George, George, help me George, please help me!" Meanwhile George was in the local brothel setting 'bout a while watching the ladies dance. The sunlight was gradually fading as it dropped behind the clouds just above the horizon, George looked at his wristwatch, all battered and scratched from the many years of ranch working it had endured, and decided that it was time to leave, Slim acknowledged that he was leaving and followed him out of the door. Just as they arrived back the tip of the setting sun dropped below the horizon, the time was approaching half past eight, and the air was chilling slightly, George pulled his jacket tighter around himself as they both walked into the ranch. Lennie was sitting on his bunk, as George walked in Lennie looked up at him. Straightaway George knew that something was the matter, not knowing what was up George asked him "what's the matter with you Lennie?" ...read more.

They had to try and persuade him as well, because after all everyone deserves a chance, no matter of race, colour or creed. They entered his lone bunkhouse; he was agitated by this mass gathering and was a little jumpy, there was a bead of perspiration running over his furrowed brow, he didn't know what they wanted, he thought they may harm him in some way, but he relaxed when they told him their plan. He was in. He was so happy that someone had wanted to include him, after all, he'd been dismissed as a 'n****r' thousands of times, no-one had ever asked him to help with anything big before. They were all in! One by one they came up with suggestions and plans and ways and means of achieving their goal. By the time the plans were finalised it was one thirty. The moon was just above the horizon; it looked larger than normal, the craters and the 'seas' were extremely bright. The whole ranch was lit up, all the stars were visible, and there was not a cloud to be seen in the night sky. "What a night," said George, "I just hope that Lennie hasn't run off," "maybe one of us should go check on him," said Crooks, "nah! Replied George, he'll be just fine." And with that they began their operation. The 'n****r' was on lookout as was Whit, one at the entrance and one by Curley's bunkhouse hidden in the bushes. George was the brains of the operation and had been secretly observing, over the few weeks he had been there, where Curley was taking the money at the end of the day. He had first had the idea of raiding the ranch when he'd come back late from walking one night and saw Curley through the window putting money into the safe, he never thought that his idea would actually come of age, but quite a lot had changed since that day! ...read more.

"Yeah!" "Let's get out of here," said George. They both got out the window and crept their way over to the exit, Whit followed slightly behind them, he caught up to them and said, "well you guys have used up at least three of your nine lives tonight," "tell me about it," said Slim, "I got so nervous at one stage I almost bottled-it!" "Anyway, how much was there in that safe," "we don't know" George told him, "we didn't really hang around to count it!" "'Course not, I understand," replied Whit. Lennie had stayed in exactly the same position for the whole night, when they saw him lying there they thought that something was wrong with him, but amazingly he had carried out George's every word to the letter, he hadn't moved, not even an inch, since George told him not to, he had no idea about the raid on the safe he hadn't a clue that they all planned to help make George's idea of buying their own ranch a reality. He couldn't believe it when they told him, he was to have a new life, new friends, new rabbits, he was overjoyed and he was speechless, probably a good thing, because nothing intelligent ever came out. All in all it had been a satisfying end to a hard nights work. They were all shocked to find out how much Curley had had stashed away in there. "That must've taken him a good few years and a good few tax evasions to rack up that much," exclaimed Carlson when he saw how much there was. There were many comments like this as the group walked down the road to their freedom, the sun had just risen straight ahead of them, George and Slim lapped up the praise as they walked into their new lives and their 'new-found' wealth. "I just feel sorry for Curley," said Candy. "Nah!" they all said in unison. Alex Fox 10-3 12th April 2002 ...read more.