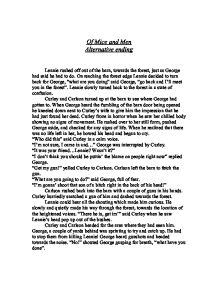 Of Mice and Men Alternative ending

Of Mice and Men Alternative ending Lennie rushed off out of the barn, towards the forest, just as George had said he had to do. On reaching the forest edge Lennie decided to turn back for George, "what are you doing" said George, "go back and I'll meet you in the forest". Lennie slowly turned back to the forest in a state of confusion. Curley and Carlson turned up at the barn to see where George had gotten to. When George heard the fumbling of the barn door being opened he kneeled down next to Curley's wife to give him the impression that he had just found her dead. ...read more.

Wasn't it?" "I don't think you should be puttin' the blame on people right now" replied George. "Get my gun!" yelled Curley to Carlson. Carlson left the barn to fetch the gun. "What are you going to do?" said George, full of fear. "I'm gonna' shoot that son of a bitch right in the back of his head!" Carlson rushed back into the barn with a couple of guns in his hands. Curley hurriedly snatched a gun of him and dashed towards the forest. Lennie could hear all the shouting which made him curious. ...read more.

George heard gunshots and headed towards the noise. "No!" shouted George gasping for breath, "what have you done". "You were both in on this weren't you? you both planned to kill her and get away, you murderous bastards!" "What are you talking about Curley, we didn't plan this" said George in panic. Were they going to kill him too? Curley raised the gun to George's head. "Can't you see that George didn't do it, put the gun down" said Carlson. Curley stared into the petrified eyes of George for a short moment of time, then took a deep breath and pulled the trigger. "What the hell is wrong with you?" said Carlson in shock, his feet rooted to the ground. Curley turned back towards the barn. "Curley" yelled Carlson ..... "Curley". ...read more.