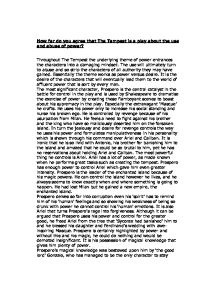 Power in the Tempest

How far do you agree that The Tempest is a play about the use and abuse of power? Throughout The Tempest the underlying theme of power entrances the characters into a damaging mindset. The use will ultimately turn to abuse and so strip the characters of all authority they may have gained. Essentially the theme works as power versus desire. It is the desire of the characters that will eventually lead them to the world of affluent power that is sort by every man. The most significant character, Prospero is the central catalyst in the battle for control in the play and is used by Shakespeare to dramatise the exercise of power by creating these flamboyant scenes to boast about his supremacy in the play. Especially the extravagant 'Masque' he crafts. He uses his power only to increase his social standing and nurse his broken ego. He is controlled by revenge because of his usurpation from Milan. ...read more.

Prospero delves so far into corruption even his 'spirit' has to remind him of his 'human' feelings and so showing his weakness of being so drunk with power he cannot control his 'human' emotions. It is also Ariel that turns Prospero's rage into forgiveness. Although it can be argued that Prospero uses his power and control for the greater good, he freed Ariel from the tree that 'Sycorax had banished' him to and he blessed his daughter and Ferdinand's wedding with awe-inspiring Masque. Prospero is certainly highlighted by power and without this and his magic, he could do nothing and would be demoted insignificant. It is his possession of magical knowledge that gives him plenty of power. Prospero's magical knowledge was bestowed upon him by 'the good lord' Gonzalo, who has managed to be the only character to stay away from power and not get involved in it. He is perhaps the most powerful character as he is exempt from the corruption. ...read more.

The three drunkards squabble over who shall be king and plot to murder their leader. Power corrupted their minds into withstanding murderous thoughts and treachery towards their loyal monarch. They create a parody of the use of power as it had distorted their minds and altered their personalities for the worse. The Tempest deals with power. Power in many forms. In it's barest form, the plot sees Prospero regain political power which has been stolen from him by a scheme led by his brother Antonio. Stripped of his social power, Prospero uses magical power to achieve his ends. The world is out of balance and a godlike Prospero uses mystic forces to bring stability. Overall, man's overwhelming desire for power is contradicted by the responsibility of keeping a rational mind. All the characters have a certain amount of power; the key is maintaining it and not letting it maroon you on an isolated island where insomnia will get the better of you. The use and abuse of power defiantly is a major part of the play and manipulates the characters who exploit each other to appear the strongest in the cycle that will ultimately end sorrowfully. ...read more.