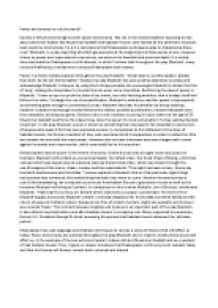 Power is a theme widely explored throughout the play Macbeth

﻿Power and tyranny to rule the world? Society is influenced strongly by both power and tyranny. We see in the media headlines exposing stories about extremist leaders like Muammar Gaddafi and Saddam Husein, who fuelled by the ambitions of power, lead countries into tyranny. So is it a coincidence that Shakespeare portrayed a play to characterise these men? Macbeth, is a play depicting a Scottish general who at the beginning is introduced as a hero, however driven by power and supernatural occurrences, we witness his downfall and eventual death. It is widely discussed whether Shakespeare is still relevant, in which I believe that throughout the play Macbeth, many issues still affecting us today were concepts Shakespeare had created. ...read more.

Similar to this is the incidents occurring in Libya, where at the age of 27, Muammar Gaddafi overthrew the Libyan king, when he was at his most vulnerable in Turkey seeking medical treatment. In the play Macbeth, power is shown as something that may lead to the downfall or destruction of anyone who seeks it for their own personal success. In comparison to this statement is the story of Saddam Husein, the former president of Iraq, who murdered all of his opposition in order to defend his title and remain the one with the most power. However due to these inhumane acts was charged with crimes against humanity and mass murder, which eventually led to his execution. ...read more.

violent murders, nights are peaceful and honours are received freely.? This contrast between kingship and tyranny is an important part of the play Macbeth, it also reflects Iraq both before and after Saddam Husein?s corruptive rule. Many supported his execution, former U.S. President George W. Bush conveying his opinion that Saddam Husein deserved the ?ultimate justice?. Shakespeare has used language and dramatic techniques to convey a series of themes that still affect us today. Power and tyranny are outlined throughout his play Macbeth and in modern society these issues still affect us, in the example of the two extremist leader?s Libyan dictator Muammar Gaddafi and ex- president of Iraq Saddam Husein. Thus, it gives us reason to believe that Shakespeare is still very much relevant today and that his themes will forever remain both universal and eternal. ...read more.