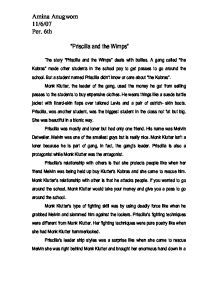 "Priscilla and the Wimps" The story "Priscilla and the Wimps" deals with bullies. A gang called "the Kobras" made other students in the school pay to get passes to go around the school. But a student named Priscilla didn't know or care about "the Kobras". Monk Klutter, the leader of the gang, used the money he got from selling passes to the students to buy expensive clothes. He wears things like a suede battle jacket with lizard-skin flaps over tailored Levis and a pair of ostrich- skin boots. ...read more.

Monk Klutter isn't a loner because he is part of gang, in fact, the gang's leader. Priscilla is also a protagonist while Monk Klutter was the antagonist. Priscilla's relationship with others is that she protects people like when her friend Melvin was being held up buy Klutter's Kobras and she came to rescue him. Monk Klutter's relationship with other is that he attacks people. If you wanted to go around the school, Monk Klutter would take your money and give you a pass to go around the school. ...read more.

Monk Klutter leadership style ran a tight ship because he wouldn't let go anywhere in school with paying for a pass. Priscilla and Monk Klutter had some many things that were different like their relationship, roles, appearance, fighting techniques, and leadership styles. But what they had in common was they were both leaders, both were students, they both know how to fight, and they both are intelligent. ?? ?? ?? ?? Amina Anugwom 11/6/07 Per. 6th ...read more.