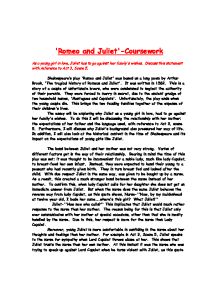 'Romeo and Juliet' - As a young girl in love, Juliet has to go against her family's wishes. Discuss this statement with reference to Act 3, Scene 5.

'Romeo and Juliet'-Coursework As a young girl in love, Juliet has to go against her family's wishes. Discuss this statement with reference to Act 3, Scene 5. Shakespeare's play 'Romeo and Juliet' was based on a long poem by Arthur Brook, 'The tragical history of Romeus and Juliet'. It was written in 1562. This is a story of a couple of unfortunate lovers, who were condemned to neglect the authority of their parents. They were forced to marry in secret, due to the ancient grudge of two household names, 'Montagues and Capulets'. Unfortunately, the play ends when the young couple die. This brings the two feuding families together at the expense of their children's lives. The essay will be exploring why Juliet as a young girl in love, had to go against her family's wishes. To do this I will be discussing the relationship with her mother; the expectations of her father and the language used, with reference to Act 3, scene 5. Furthermore, I will discuss why Juliet's background also pressured her way of life. In addition, I will also look at the historical context in the time of Shakespeare and its impact on the expectations of young girls like Juliet. ...read more.

Lady Capulet does the opposite, instead she goes with what her husband says, as this quote shows,''Ay,sir;but she will none, she gives you thanks. I would the fool were married to her grave.'' Here Lady Capulet is trying to stress the fact that because Juliet did not give thanks to her father and except her marriage to Paris she would rather have her dead. This conveys a weak bond between lady Capulet and her daughter, as even the nurse who was not a blood relative, cared enough about Juliet to have stood up to her boss. This maybe that Lady Capulet respected her husbands wishes more than her daughter's welfare. Which would be common in those days as it was a patriarchal society. This could be another reason why the relationship between lady Capulet and Juliet was so weak. When Juliet was told of her marriage proposal to the count Paris, Lord Capulet had expected that she would agree to her father's wishes. Juliet's father is a well respected man, who was obeyed by everyone due to his importance in the society. ...read more.

As Romeo's wife, Juliet's character's transformation from naive innocence to more a mature nature is seen as gradual progress in this scene. Big decisions are made by Juliet, even those that get her into trouble. For example, she stood up to her father by denying the marriage proposal to Paris, for the love of Romeo. This changes Juliet from a petty lover to a self-controlled wife. When the nurse does not offer her any sympathy, she in turn goes seeking for help to Friar Lawrence. This shows that Juliet was capable of looking after herself; a dramatic change from the previous scenes. Conclusion Juliet was trapped between her family and her lover. Her life was influenced by the thoughts and decisions of the adults surrounding her. She could not control her own destiny. Due to the social stature of her parents, they had set expectations of Juliet. As a result, she cannot do anything that would put her family's name at risk. In addition, Juliet lacked freedom and had very limited rights by being a girl. But Juliet's love for Romeo was too strong for her to keep within the boundaries that she was expected. Moreover, she had no option but to go against her family's wishes as they prevented her from being with her only love, Romeo. ...read more.