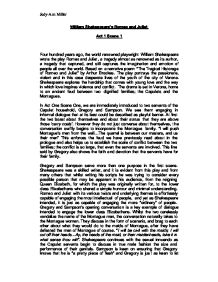 William Shakespeare's Romeo and Juliet Act 1 Scene 1 Four hundred years ago, the world renowned playwright William Shakespeare wrote the play Romeo and Juliet, a tragedy almost as renowned as its author, a tragedy that captured, and still captures the imagination and emotion of people all over the world. Based on a narrative poem: "The Tragical Historage of Romeo and Juliet" by Arthur Brookes. The play portrays the passionate, violent and in this case desperate lives of the youth of the city of Verona. Shakespeare explores the hardship that comes with young love and the way in which love inspires violence and conflict. The drama is set in Verona, home to an ancient feud between two dignified families; the Capulets and the Montagues. In Act One Scene One, we are immediately introduced to two servants of the Capulet household, Gregory and Sampson. We see them engaging in informal dialogue that at its best could be described as playful banter. At first the two boast about themselves and about their status that they are above those 'carry coals'. However they do not just converse about themselves, the conversation swiftly begins to incorporate the Montague family. "I will push Montague's men from the wall...The quarrel is between our masters, and us their men" This enforces the feud we have previously read about in the prologue and also helps us to establish the scale of conflict between the two families; the conflict is so large, that even the servants are involved. This line said by Gregory also shows the faith and devotion that the servants have for their family. Gregory and Sampson serve more than one purpose in the first scene. ...read more.

He then engages in a brawl with him after letting it be known that he hates peace as much as he hates the Montagues. 'What, drawn and talk of peace? I hate the word, as I hate hell, all Montagues'. From this we learn of the deep loathing Tybalt feels for the Montagues and also his belief that the way to resolve the feud is through violence and conflict not forgiveness or reconciliation. The Prince's speech in Act One is another way in which William Shakespeare has emphasised the ever-running theme of conflict. The conflict has disrupted the peace in the city, and in fact holds dominion over everyone existent in Verona. It is implied that every citizen in Verona is either allied to the Capulets, the Montagues or to the law. "And made Verona's ancient citizens cast by their grave-beseeming ornaments, to wield old partisans in hands as old" literally translates in modern English to mean "and Verona's old citizens have had to take off their dress clothes and pick up rusty old spears to part you" and is evidence of the effect the feud has on the citizens of Verona. Prince Escalus is the Prince of Verona, he is the seat of political power in the city and is concerned about maintaining the public peace at all costs. In Act one scene one he gives a speech to Lord and Lady of both households as well as a handful of other members from each family. The prince is the first truly neutral character that we are introduced to and his speech gives the audience the chance to view the feud and each family from an unbiased perspective. ...read more.

He asks to be spared the details of the happenings, though he does not hold back on his opinions of the matter. They resume their conversation about love, but this time about a different kind of love, Romeo expresses to Benvolio his feelings about the fight. He sees the hate that has caused the fight, but he sees and says that love is just as much to blame 'Here's much to do with hate, but more with love'. He uses oxymorons to emphasise this thought. 'O brawling love, O loving hate'. An oxymoron is phrase that contradicts itself and in these cases it is used to describe the pain and hardships of love and the idea that hate can be derived from love. As Romeo continues to speak he reveals a series of oxymorons 'O heavy lightness... feather of lead... cold fire...sick health' as he lists them their relevance to the situation they are discussing becomes less and less obvious. I feel that the listing of these oxymorons build a depressing aura that resides around Romeo for this first scene. An oxymoron is a conflict with itself and I believe the conflict shown between the contradicting words in an oxymoron are used to represent the internal emotional conflict from which Romeo suffers. I think that Shakespeare successfully managed to reveal the theme of conflict to his audience. He used various devices in different ways to show many different types of conflict. I feel that the opening dialogue; from the two Capulet servants boasting to the brawl with the two servants of Montague was where Shakespeare showed conflict best. The purpose of Act one scene one is to build up the theme of conflict so that the audience is able to understand the events that occur in later scenes and the reason behind the final fatal conclusion. ?? ?? ?? ?? Jody-Ann Miller ...read more.