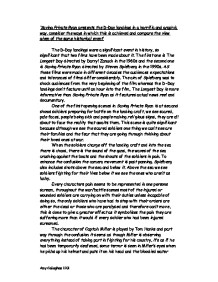 'Saving Private Ryan presents the D-Day landings in a horrific and graphic way, consider the ways in which this is achieved an

'Saving Private Ryan presents the D-Day landings in a horrific and graphic way, consider the ways in which this is achieved and compare the view given of the same historical event' The D-Day landings were a significant event in history, so significant that two films have been made about it. The first one is The Longest Day directed by Darryl Zanuck in the 1960s and the second one is Saving Private Ryan directed by Steven Spielberg in the 1990s. AS these films were made in different decades the audiences expectations and tolerances of films differ considerably. The aim of Spielberg was to shock audiences from the very beginning of the film whereas the D-Day landings don't feature until an hour into the film, The Longest Day is more informative than Saving Private Ryan as it features actual news reel and documentary. One of the first opening scenes in Saving Private Ryan is at sea and shows soldiers preparing for battle on the landing craft, we see scared, pale faces, people being sick and people making religious signs, they are all about to face the reality that awaits them. This scene is quite significant because although we see the scared soldiers one thing we can't see are their families and the fear that they are going through thinking about their loved ones at war. ...read more.

There are several shock scenes in this film; one of them being that the surviving soldiers take the weapons and ammunition from the recently deceased, this is shocking to general people because we don't know the horrors of war and what soldiers have to go through to survive. Another scene which is used to make people think about the reality of war, was the medical team didn't have enough equipment to save all soldiers so were prioritising who to treat and whilst treating them using corpses to shelter them because they were getting shot at. The desired impact on the audience is completely to shock and show the realities of war, because if you are never in that situation you never know what it's like. I think that what this film shows us is really good because we know what soldiers face during battle and it makes us respect them more. In complete contrast to Saving Private Ryan we have The Longest Day, which is also a film about the D-Day landings, but made several decades earlier when the technology for film making wasn't as high quality as the films are that are made in the present day. ...read more.

The desired impact of this film was to hide the realities of war and to comfort people because The Longest Day portrays the war as not being so bad when in the present day we know that it was. In one way I think that The Longest Day is better than Saving Private Ryan because Zanuck shows all sides of the war and it makes us realise that the Germans went through exactly the same as the British and that they lost soldiers too, if Saving Private Ryan was to do the same it would be a better film. Both the films are good at showing the war especially as The Longest Day shows some actual footage of the events. If The Longest Day was to come out at cinemas now I can safely say that it wouldn't be successful and if there was the technology to make Saving Private Ryan in the 1960s it wouldn't have been shown because it would have made the audiences violently sick. This concludes that both the films are good, but only at the time they were made. ?? ?? ?? ?? Amy Callaghan 1101 ...read more.