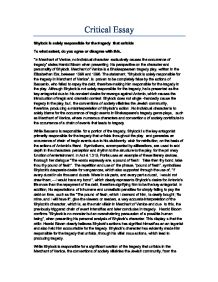 Shylock is solely responsible for the tragedy that unfolds To what extent, do you agree or disagree with this.

The repetition and use of the phrase, "pound of flesh", symbolises Shylock's desperate desire for vengeances, which also supported through the use of, "If every ducat in six thousand ducats Were in six parts, and every part a ducat, I would not draw them,-I would have my bond", which clearly represents Shylock's desire for Antonio's life more than the repayment of the debt, therefore signifying him to be the key antagonist. In addition, his expectations of inhumane and unrealistic penalties for simply failing to pay the debt on time, such as the "The pound of flesh, which I demand of him, is dearly bought; 'tis mine, and I will have it", give the viewers or readers, a very accurate interpretation of the Shylock's character, which is, as the main villain in Merchant of Venice and due to this, the previously triggered chain of event intensifies and later concludes in tragedy. ...read more.

This undoubtedly shows, Shylock's respect for the law, on the other hand, Antonio and Bassano defaulted the borrowed loan, therefore, failing to follow the law. This juxtaposition shows the involvement of anti-semitism in the Merchant of Venice because of the discrimination against the Jewish community as Shylock was following the law and yet, the audience were presented with the idea of Shylock being the key antagonist. When play was performed during the time it was written, the conventions of society were a major influence on who was the key antagonist in the Merchant of Venice, because during of the religious conflict between the two religions, Christianity and Jewish, and with the setting of the play in Venice, where the Jewish community for banned several years and later treated as second class citizens. Furthermore, this is supported through the use of simile, in "Antonio spat on me just last week and treated me like dog", since, it clearly displays how the Christian, Antonio, has used to setting of Venice, where the religion in majority was Christianity, to discriminate against Shylock, the Jew. ...read more.