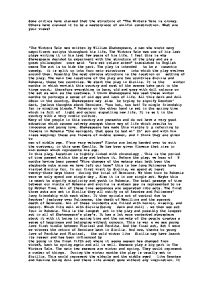 Some critics have claimed that the structure of &quot;The Winters Tale is clumsy - Others have claimed it to be a masterpiece of skilful construction - What are your views?

Some critics have claimed that the structure of "The Winters Tale is clumsy. Others have claimed it to be a masterpiece of skilful construction. What are your views? 'The Winters Tale was written by William Shakespeare, a man who wrote many magnificent scripts throughout his life, The Winters Tale was one of his last plays writing it in his last few years of his life. I feel this is why Shakespeare decided to experiment with the structure of the play and as a great philosopher once said "ars est celare artem" translated to English means The art is to hide the part. The play is intended to be a romantic comedy, it is split up into four main structures into which the play evolves around them. Possibly the most obvious structure is the location or setting of the play. The main two locations of the play are two countries Sicilia and Bohemia, these two countries. We start the play in Sicilia. It is the winter months in which wevisit this country and most of the scenes take part in the kings court, therefore everything is bare, old and grey with dull colours on the set as well as the costumes. I think Shakespeare has used these winter months to portrays a sense of old age and lack of life. ...read more.

Seasons play a big part in The Winters Tale. The main two seasons are winter and spring. They could represent a number of things. During the winter months the play is usually set in Sicillia. This could represent the elderly and the middle aged like Leontes and Paulina being dull and there life almost gone without any inspiration. It could also represent the jealousy of the corrupted mind in Leontes thinking dark and devilish thoughts about Hermione and Polixenes. The spring time represents young, youthful innocence. With this we focus on Perdita and Florizel. With there young modest love they show there everlasting love. There love s unspoilt by jealousy and deceit and is natural. A Character between these two seasons is a man called Autolycous. He has said to of been a man of the court " I have served prince Florizel, and in my time wore three pile;but now I am out of service" and now he lives in the countryside. I think that he represents the mid-point of the year , with spring , bringing innocence and naivety and winter bringing superstition and deceit. Autolycous has a bit of both, leaving him to be a comedy character with no real meaning in the play apart from this. ...read more.

Regal in bearing. Idealistic and in control of things. Men on the other hand seen as women were ment to be viewed. Take Leontes for example. He is seen as weak and extremely mercurial. He admits this to himself in act two, scene three, line 153 "I am a feather for each wind that blows" throughout the play Shakespeare uses the message of christianity. The idea of sin, forgivness and redemption. We can see this in Leontes. When Hermione dies, He vows to weep and visit her grave everyday. "Once a day ill visit the chapel where they lie, and tears shed there shall be my recreation." we can see forgivness in Hermione in act five. After all these years and all she has suffered she is still willing to forgive her husband. This shows a very important christian meesage maybe to reassure Shakespeare as an elderly man that god will forgive you as your days come to an end. Like the start which was very quick to get into, the ending and to a climax and an ending very quickly and it seems rather rushed. Some may say this is an incident of clumsiness. However i still think this is a piece of shakespeares genious. As you can see. So much thought has gone into the making of this play. So many structures and conflicts between juxtapositions. It can be anything but clumsiness. ...read more.