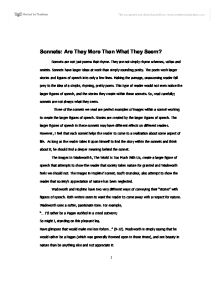 Sonnets: Are They More Than What They Seem?

Both writers seem to want the reader to come away with a respect for nature. Wadsworth uses a softer, passionate tone. For example, "... I'd rather be a Pagan suckled in a creed outworn; So might I, standing on this pleasant lea, Have glimpses that would make me less forlorn..." (9-12). Wadsworth is simply saying that he would rather be a Pagan (which was generally frowned upon in those times), and see beauty in nature than be anything else and not appreciate it. Hopkins however, uses a slightly angrier, demanding tone. For example: "...Generations have trod, have trod, have trod; All is seared with trade; bleared, smeared with toil..." (5-6). Here, Hopkins is saying that many generations of human being have walked on the Earth, and beaten paths where they walked. ...read more.

The second line suggests that Millay no longer feels this love. He uses the word "sings" which creates the image of songbirds, another piece of summer. Within these three sonnets, Wadsworth's The World Is Too Much With Us, Hopikns' God's Grandeur, and Millay's What Lips My Lips Have Kissed, And Where, And Why, there is a story. These sonnets do not simply describe something or someone. They do not simply show the poet's feelings about something. They tell a story through images, and figures of speech. The three sonnets above are prime examples of stories within a sonnet. They are also perfect reasons why a reader should read closely, because as you can see, these sonnets were not what they seemed. They were also great, fascinating stories that can be applied to one's own life, and those are the stories one should never miss. 1 1 ...read more.