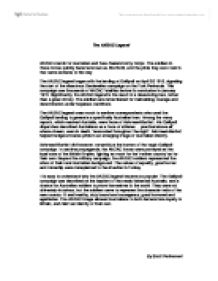 The ANZAC Legend ANZAC stands for Australian and New Zealand Army Corps. The soldiers in those forces quickly became known as ANZACS, and the pride they soon took in that name endures to this day. The ANZAC legend began with the landing at Gallipoli on April 25 1915, signaling the start of the disastrous Dardanelles campaign on the Turk Peninsula. This campaign saw thousands of ANZAC fatalities before its conclusion in January 1916. Significantly, the ANZAC legend is the result of a devastating loss, rather than a great victory. The soldiers are remembered for maintaining courage and determination under hopeless conditions. The ANZAC legend owes much to wartime correspondents who used the Gallipoli landing to generate a specifically Australian hero. ...read more.

Beyond the military campaign, the ANZAC soldiers represented the ethos of their rural Australian background. The values of equality, good humor and mateship were transplanted to the situation in Turkey. It is easy to understand why the ANZAC legend became so popular. The Gallipoli campaign was described as the baptism of the newly federated Australia, and a chance for Australian soldiers to prove themselves to the world. They were not ultimately victorious, but the soldiers came to represent the character traits of the new country: fit and healthy, duty bound and courageous, good humored and egalitarian. The ANZAC image allowed Australians to both demonstrate loyalty to Britain, and claim an identity of their own. ...read more.

Equally, the Australian equality and irreverence for authority meant that many thought that they were not model soldiers. Indeed, some have contended that it was often used as a mask for the real fear and cowardice of war. Perhaps the strongest criticism leveled at the ANZAC image is its exclusiveness. Undeniably white and masculine, it denies women, migrants and Aborigines any share in its image of Australian identity. Despite its acknowledged inaccuracies, the ANZAC legend continues to be an enduring and endearing representation of Australia. Some suggest this is because, in an increasingly secular society, the ANZAC image provides a focus for belief in a higher ideal, that is, in the sacrifice of self for the benefit of a greater good. The ANZAC attributes still appeal to a sports-loving, anti-authoritarian culture where mateship still holds pride of place. ...read more.