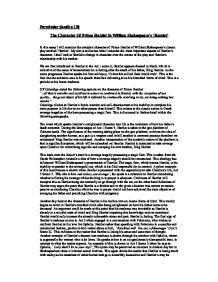 The Character Of Prince Hamlet In William Shakespeare's 'Hamlet'.

Parminder Sandhu 120 The Character Of Prince Hamlet In William Shakespeare's 'Hamlet' In this essay I will examine the complex character of Prince Hamlet of William Shakespeare's classic play entitled 'Hamlet'. My aim is to discuss what I consider the most important aspects of Hamlet's character. I shall look at Hamlet's change in character over the course of the play and Hamlet's relationship with his mother. We are first introduced to Hamlet in the Act 1 scene 2; Hamlet appears dressed in black, which is reflective of the sense of bereavement he is feeling after the death of his father, King Hamlet. As the scene progresses Hamlet speaks his first soliloquy, 'O that this sullied flesh would melt'. This is the first line the audience sees in his speech therefore indicating to us his disturbed frame of mind. This is a prelude to his future madness. S.T.Coleridge stated the following opinion on the character of Prince Hamlet: ''..all that is amiable and excellent in nature in combined in Hamlet, with the exception of one quality... the great object of his life is defeated by continually resolving to do, yet doing nothing but resolve''. Coleridge alludes to Hamlet's future inaction and self-chastisement at his inability to complete his main purpose in life due to no other person than himself. This relates to the classic notion in Greek revenge tragedies of the hero possessing a tragic flaw. ...read more.

This would contradict the idea that Hamlet is a thinker, as he is not communicating with other human beings in the accepted polite way. Hamlet's also places himself upon a pedestal, in which he feels that he is a chosen person whom god has given the right to take a persons life if Hamlet's feels it is necessary to, ' that I must be their scourge and minister'. An example of his arrogance is shown during his discussion with Claudius over the death of Polonious. Hamlet refers to Polonious as simply body parts rather than as a person, ' I'll lug the guts into the neighbours room'. Hamlet is once again being incredibly delirious and inconsiderate towards other people feelings, as to a sane human being this description of a human being would be considered repulsive. This de-humanizing of a person shows the reader that Hamlet's mind is disintegrating into one of an evil and corrupt person with unholy satanic views. The devilish way of thinking which Hamlet has transgressed into is conveyed to the reader when he speaks of condemning another human being to hell. This threat of damnation to another represents to us that Hamlet may have become insane, also losing sight of the limitations which a he has, as Hamlet is oblivious to the fact that he does not hold such a great power over someone. This shows that Hamlet has not only become insane when having a dialogue with others but also losing moral sense. ...read more.

This is due to the idea that if Hamlet was not informed of the death of his father in the manner which occurred and then instructed to seek out revenge, there would be no inclination on the part of Hamlet to trouble himself with the burden of his father's possible route to heaven depending on him. Therefore the stress of having such responsibility placed upon him and being unable to carry out his father's orders may have lead to Hamlet's mind descending into madness involuntarily as the extreme and conflicting emotions running through his thought process could possible have lead to a mental breakdown. Lastly Hamlet's relationship with his mother could also relate to Hamlet's tragic flaw transcending from a physical to a mental disease. This is relating to the aforementioned idea of sexual corruption existing within Hamlet's mind through a possible Oedipal complex. Hamlet's inaction may have extended to his mental indecision about what his true feelings towards his mother actually are therefore causing Hamlet's emotions and physical interaction with Gertrude to vary. This leads to a strange and inconsistent relationship existing between the two just as Hamlet's tragic flaw prevents him from possessing any consistent sense of purpose and public projection in terms of the nature of his character. In conclusion the character of Hamlet is a complicated individual who like a classic tragic hero has a flaw preventing him from completing his quest for revenge, without dying in the process. His relationship with women on the whole is also multi layered as his plethora of emotions are shown when he interacts with his mother and Ophelia. ...read more.