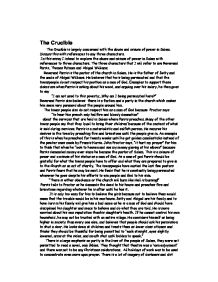 The Crucible The Crucible is largely concerned with the abuse and misuse of power in Salem. Discuss this with references to any three characters. In this essay I intend to explore the abuse and misuse of power in Salem with references to three characters. The three characters that I will refer to are Reverend Parris, Thomas Putnam and Abigail Williams. Reverend Parris is the pastor of the church in Salem. He is the father of Betty and the uncle of Abigail Williams. He believes that he is being persecuted and that the townspeople do not respect his position as a man of God. Examples to support these claims are when Parris is asking about his wood, and arguing over his salary, he then goes to say "I am not used to this poverty;..Why am I being persecuted here?" Reverend Parris also believes there is a faction and a party in the church which makes him seem very paranoid about the people around him. The towns people also do not respect him as a man of God because Proctor says "to hear him preach only hellfire and b****y damnation" about the services that are held in Salem where Parris preaches. Many of the other towns people say that they 'quail to bring their children' because of the content of what is said during services. Parris is a materialistic and selfish person. ...read more.

He is the husband of Ann Putnam, and father to Ruth. He is a powerful man in the village with a long family line. He is the eldest son of the richest man in the village and regards himself to be the most intellectual superior of the people around him. He forces his way in whatever matters benefit him and becomes extremely bitter when he doesn't succeed. He became very bitter when he was turned down blatantly by the village people for one of its more important offices, as he was deeply interested in parish affairs. Mr and Mrs Putnam will not believe Rebecca Nurse when she says that is only a 'silly season' that the girls are going through. But then to compensate the Putnams blame Rebecca Nurse for the deaths of their children. Mrs Putnam then goes to say "There are wheels within wheels in this village, and fires within fires!" meaning that there is more going on in the village that they know of and that the truth is being hidden. Instead of accepting that they have problems of their own, the Putnams turn their anger towards the other villagers and accuse others. Putnam resents any one with more acreage than him and any one of a higher status. An example of his misuse of power is when he is accused of coercing his daughter to accuse people, for example, George Jacobs, in order to gain their forfeited land. ...read more.

Every one in the room at that time believe Abigail, because she suddenly let out a loud scream and the people around wouldn't think that she would do such a thing to herself. Abigail also convinces the court that Marry Warren is lying when she admits to making the doll and putting the needle it the doll. Abigail then pretends to be cold and witched by Marry Warren because she tells the court that it was only pretence that the said they saw the devil and also saw others with the devil. The court believes Abigail as well because her skin is cold and she tells the court that she feels a cold breeze. There is a very large amount of misuse of power in Salem and the above is only a little. The accused in Salem were essentially condemned before they went to trial. Those who decided to live by admitting to witchcraft were ostracized by society much as those thought to be communists were blacklisted. People as a group can get caught up in the moment and act in an irrational manner. The events in Salem are a solemn reminder of what can happen when we allow ourselves to be carried along with the crowd. We must think hard about how we can preserve our system of justice so as not to risk repeating such an awful moment in history. By Hannah Evans 10D ...read more.