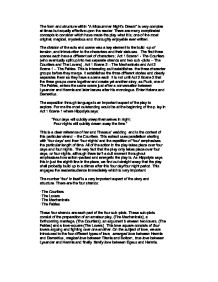 The form and structure within &quot;A Midsummer Night's Dream&quot;.

The form and structure within "A Midsummer Night's Dream" is very complex at times but equally effective upon the reader. There are many complicated concepts to consider which have made the play what it is; one of the most original, magical, mysterious and thoroughly enjoyable ever written. The division of the acts and scene was a key element to the build-up of tension, and introduction to the characters and their statuses. The first three scenes each have a different set of characters; Act 1 Scene1 - The Courtiers (who eventually split up into two separate strands and two sub-plots - The Courtiers and The Lovers) ,Act 1 Scene 2 - The Mechanicals and Act 2 Scene 1 - The Fairies. This is interesting as it establishes the three character groups before they merge. It establishes the three different stories and clearly separates them as they have a scene each. It is not until Act 2 Scene 2 that the three groups come together and create yet another story, as Puck, one of The Fairies, enters the same scene just after a conversation between Lysander and Hermia and later leaves after his monologue. ...read more.

and a love-square (The Lovers). This love square consists of four lovers arguing and fighting over one another. On the subject of love, we are introduced to the four different types of love; arranged love between Hermia and Demetrius, magical love between Titania and Bottom, true love between Lysander and Hermia and finally family love between Egeus and Hermia. These four aspects of the play revolving around the number 'four' all take place over four days and four nights of action. There could well be no real reason or clue behind the aspect or significance of four but it is probably the only way in which the play would have worked including the ideas of the love square and the four sub-plots. More important elements of the structure of the play were the moments of tension and the appropriateness of their timing. One key moment of tension is between Quince and Bottom as they each attempt to establish their status. This is the context of the second strand, The Mechanicals. ...read more.

Demetrius concludes with: "Ay, and Wall too." At this point, Bottom gets up and explains the situation, completely out of character and we all know it is not in the script. It is highly amusing: "No, I assure you, the wall is down that parted their fathers." Finally, 'song' is important in the form as well as humour. The Fairies speak in Rhyme and they also sing. This distinguishes them immediately in the play as different and more mischievous than The Courtiers or The Lovers or even The Mechanicals. The way they communicate is fluent and initially, it establishes them from the 'humans' so to speak. The idea of The Fairies singing a lullaby to Titania before she retires to bed is very clever too as it completely conveys her status and how they all look after her and see she is good and well perhaps before themselves. In conclusion, form and structure and many methods and elements of which, play a huge part in the play, as it builds up to a comic, jolly and emphatic climax where everybody ends up being happy. FORM AND STRUCTURE within "A Midsummer Night's Dream" ...read more.

The writer has made a range of good points about form and structure:
1. The juxtaposition of acts and scenes for dramatic effect. However comment is restricted to the beginning of the play only.
2.Use of Parallels. This could be extended to include contrasts as well as parallels - contrasting settings, contrasting social status of characters, contrasting kinds of humour and so forth.
3. Comments on language use such as songs. This section could be developed by a more wide-ranging exploration of how blank verse and prose are used in the play, and how the language of the fairies contrasts with the language of the humans.