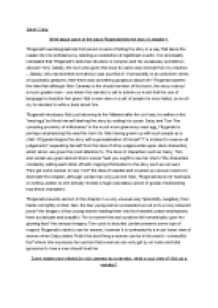 &quot;The Great Gatsby&quot; - analysis of Chapter 1 and the effect of using Nick as the narrator.

﻿Sarah Craig Write about some of the ways Fitzgerald tells the story in chapter 1 Fitzgerald?s autobiographical first person means of telling the story in a way that takes the reader into his confidence by retelling a recollection of significant events. It is immdeiatly noticeable that Fitzgerald?s sentence structure is complex and his vocabulary sometimes obscure ?only Gatsby, the man who gives this book its name was exempt from my reaction ? Gatsby, who represented everything I was scornful of. If personality is an unbroken series of successful gestures, then there was something gorgeous about him? Fitzgerald asserts the idea that although Nick Caraway is the should narrator of this book, the story is about a much greater man ? one whom the narrator is set to admire so much that the use of language to describe him gives Nick a new view on a set of people he once hated, so much so, he decides to write a book about him. Fitzgerald introduces Nick just returning to the Midwest after the civil war, he settles in the ?west egg? but finds himself starting the story by visiting his cousin Daisy and Tom ?the consoling proximity of millionaires? ...read more.

Some readers are irritated by nick caraway as a narrator, what is your view of Nick as a narrator? Fitzgerald?s interesting and intelligent use of such a character is in no way a mistake, he would have been aware of the dangers from such an unusual means of narrating, however it works very well and makes this book the success it is. The use of Nick as more of a spector than an actual narrator involves us as readers and allows us to make up our own minds about the characters rather than having a central character as a narrator who may be in love with Daisy or hate Tom, whose language would then shape our own opinion of them. Nick is able to re-call past events in a very serious tone but yet at the same time his sensual and light-headedness description on small matters reflect pleasure onto the reader ?I had two ? finger bowels of champagne, and the scene had changed before my eyes into something significant, elemental and profound? commenting on small humorous parts of the story make the reader more able to relate as in our own lives we would notice such changes after ...read more.

So at the end of the novel Nick no longer looks at the world through symbolism as he remarks ?he must have looked up at a familiar sky through frightening lease and shivered as he found was grotesque thing a rose is and how raw the sunlight was upon the secrecy grass? Fitzgerald here uses this technique to cut Nick?s symbolic language on beautiful things, to mirror the down turn of events and keep in with the language to reflect the mood of gloom the reader may be feeling, again heightening the reader?s opinion of Nick, as he is many ways realistic when it comes to the language he uses to express events that aren?t so glamorous. The use of Nick as a narrator is without a doubt a genius idea from Fitzgerald. He was able to contrast the norm and expected narrator but yet at the same time engage the reader with it. The writer is kept realistic, with real romances such as his relationship with Jordan giving him his own story but yet still present Gatsby in the intelligent and beautiful way Fitzgerald intended. ...read more.