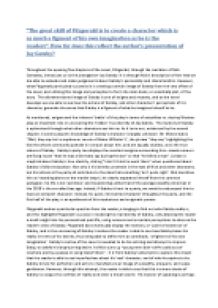 The great skill of Fitzgerald is to create a character which is as much a figment of his own imagination as he is the readers. How far does this reflect the authors presentation of Jay Gatsby?

﻿?The great skill of Fitzgerald is to create a character which is as much a figment of his own imagination as he is the readers?. How far does this reflect the author?s presentation of Jay Gatsby? Throughout the opening five chapters of the novel, Fitzgerald, through the narration of Nick Carraway, introduces us to the protagonist- Jay Gatsby. It is through Nick?s description of him that we are able to evaluate and make judgements about Gatsby?s personality and characteristics. However, what Fitzgerald particularly succeeds in is creating a certain image of Gatsby from the very offset of the novel, and utilising this image and perception to form the main basis, or essentially plot, of the story. The aforementioned image of Gatsby is one of enigma and mystery, and as the novel develops we are able to see how the actions of Gatsby, and other characters? perceptions of his character, generate the sense that Gatsby is a figment of what he imagines himself to be. ...read more.

Fitzgerald evokes a particular question from the reader; a longing to find out who Gatsby really is, and this highlights Fitzgerald?s success in masking the real identity of Gatsby, only allowing the reader a small insight into his personal and past life, using rumours and uncertain perceptions to obscure the reader?s view of Gatsby. Fitzgerald does eventually display the motives, or ?point of existence? of Gatsby, and in the uncovering of Gatsby?s motives the reader is able to see how Gatsby bases his reality in terms of his desires, thus being able to define him as somebody ?a figment of his own imagination?. Gatsby?s motive of the novel is revealed to be his enticing and attempt to impress Daisy; to satisfy his long-burning desire. As Nick sums up ?young men didn?t drift coolly out of nowhere and by a palace on Long Island Shore?. It is from Gatsby?s attempts to capture this dream that the reader is able to see imperfections about his ?real? character, and of who he aspires to be. ...read more.

These anomalies symbolise his enigmatic character- he is a man who is experiencing the battle of illusions versus reality. Gatsby, and his relationship with wealth and class are also enigmatic. The ?green light? symbolises a want for wealth and consumerism, something that reflected the nature of America in the ?roaring twenties?. (In Fitzgerald?s own life we see that his marriage proposal to Zelda Sayre was only accepted when she saw that he was in a state of financial security, so some of his acceptance of love may have transgressed into the novel.) ?The American dream? automatically implies equality and avocation of democracy, however there are certain images throughout the book that contradict this. The wide variety of references to Europe, including an ?Oxford? education, ?Marie Antoinette restoration salons?, ?gardens of Versailles? and ?little Montegro? evidences the class extrapolation from Europe; America?s paradox of attempting to transform its image in an unsuccessful way reflects Gatsby?s attempt of trying to manufacture an image that cannot be fulfilled. ...read more.