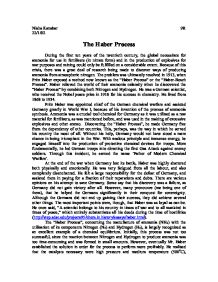 9R 22/1/02 The Haber Process During the first ten years of the twentieth century, the global necessitate for ammonia for use in fertilizers (in nitrate form) and in the production of explosives for war purposes and mining could only be fulfilled on a considerable extent. Because of this crisis, there was a great deal of research being made to discover ways of producing ammonia from atmospheric nitrogen. The problem was ultimately resolved in 1913, when Fritz Haber exposed a method now known as the "Haber Process" or the "Haber-Bosch Process". Haber relieved the world of their ammonia calamity when he discovered the "Haber Process" by combining both Nitrogen and Hydrogen. He was a German scientist, who received the Nobel peace prize in 1918 for his success in chemistry. He lived from 1868 to 1934. Fritz Haber was appointed chief of the German chemical warfare and assisted Germany greatly in World War I, because of his invention of the process of ammonia synthesis. Ammonia was a crucial tool chemical for Germany as it was utilized as a raw material for fertilizers, as was mentioned before, and was used in the making of excessive explosives and other ammo. Discovering the "Haber Process", he made Germany free from the dependency of other countries. This, perhaps, was the way in which he served his country the most of all. ...read more.

After meticulous study, it was discovered by the Germans that their nitrogen source was 'right under their noses'... literally. Their supply of Nitrogen was in the air, which consisted of about 80% of the element. With this information, Haber invented the process of extracting nitrogen from the air and using it to from Ammonia gas by coalescing it with hydrogen. (http://www.creative-chemistry.org.uk/gcse/documents/Module7/N-m07-03.pdf). This brings the equilibrium reaction of the "Haber Process" to be: N2(g) nitrogen + 3H2(g) hydrogen heat, pressure, catalyst --------------------------> 2NH3(g) ammonia The breakthrough of the "Haber Process" has not only stopped at the procedure of ammonia with the two elements. Through this discovery followed the manufacture of nitric acid, which can be reacted with ammonia to form ammonium nitrate. This is used to make the highest prevalent fertilizer at present. There are three raw materials used in the procedure to manufacture ammonia. These are: Air (to produce nitrogen), and methane and water (to produce hydrogen). When methane and steam is reacted, carbon dioxide and hydrogen are created. The hydrogen that is used in the "Haber Process" is extracted from the 'CO2-H2' compound by *fractional distillation. There are specific conditions in order to produce ammonia. The higher the temperature, the faster the reaction (http://www.ausetute.com.au/haberpro.html). It is definite that the short-term impact of the "Haber Process" on societies was quite lucrative. However the discovery still has a massive impact on us today. ...read more.

Moral and ethical considerations are always around, whether people like it or not. The main two issues surrounding this opening statement that relate to the "Haber Process" are (as usual) Fertilizers and Explosives. If used as an explosive, the "Haber Process" can have a big effect on the earth, damaging its environment. Where war is concerned, millions could be obliterated. The possible damage that could be done makes us wonder whether the use of the Process is worth the destruction. In the aspect of agriculture, the "Haber Process" is more successful. To summarize, Fertilizers help crops to sustain best possible growth. This increases the land-value, raises market sale, and feeds hungry individuals. On the down side, too much fertilizer can harm the environment. Of both these "Haber Process" issues, which do you think may be worse? The controversy of this issue is still at large, and both arguments have valid points. Above all the debate and dispute going on over this issue, Fritz Haber still stands at the very top. His simple Nitrogen and Hydrogen combination to produce ammonia caused such commotion and questions till today, over 50 years after. It all began in Germany, and it is now spread around the world like wildfire. Life would not be as it is today without the 'Father of Chemical Warfare'. *Fractional Distillation: When the liquid or mixture is boiled to vaporize (liquid => gas), then is cooled by cold water to condense (gas => liquid) it back to a liquid which is collected. ...read more.