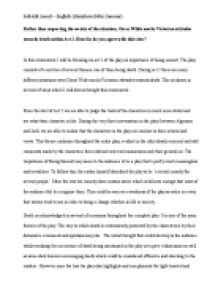 The Importance Of Being Earnest. Oscar Wilde mocks Victorian attitudes towards death within Act 2. How far do you agree with this view?

﻿Sehrish Javed ? English Literature (Miss Sunner) Rather than respecting the society of the situation, Oscar Wilde mocks Victorian attitudes towards death within Act 2. How far do you agree with this view? In this coursework I will be focusing on act 2 of the play an importance of being earnest. The play consists of a mixture of several themes, one of them being death. During act 2 there are many different situations were Oscar Wide mocks Victorian attitudes towards death. This is shown in several of ways which I will discus thought this coursework. From the start of Act 2 we are able to judge the traits of the characters in much more detail and see what their character is like. During the very first conversation in the play (between Algernon and Jack) we are able to realise that the characters in the play are careless in their actions and views. This theme continues throughout the entire play, evident in the ridiculously comical and odd comments made by the characters, their odd and reserved mannerisms and their general air. ...read more.

This is clearly vivid at one point when Algernon rejects to a dinner invitation in a polite manner in order to visit unwell Bunbury. During this act Lady Bracknell states, "I must say, Algernon, that I think it is high time that Mr Bunbury made up his mind whether he was going to live or to die. This shilly-shallying with the question is absurd" (Act 1, part 2). This is rather comical as most of the characters discuss death being something an individual has control over, not seeing that death is a final decision which has no coming back neither any sort of control. This is proven by the quote stated above said by Lady Bracknell. Subsequently the characters in The Importance of Being Earnest do not act in a manner that is appropriate or socially acceptable in modern time. The reason being is that their view on death as a group is extremely unsympathetic. ...read more.

Overall thought the importance of Being Earnest, I believe that Oscar Wilde mainly emphasises on the act of dying being a comical theme. He clearly indicates the Victorian attitudes being very unsympathetic and mocking upon death rather than respecting the values and sobriety of the situation. The main message shown in this comedy is that people who are ill are better out of the way, and those who are orphaned are unfortunate but probably deserved it. There is no need for grieving or memorials, for those who have passed on and in fact hold no importance. This as a whole indicates that such immoral behaviour shown by someone is considered to be mentally unstable therefore it reflects on the mentalities of the characters of the play. Oscar Wilde shows a group of individuals view to be very cold and light hearted as they portray ?death? being just a black comedy, whereas in actual fact death is one of the most heart breaking life events. ...read more.