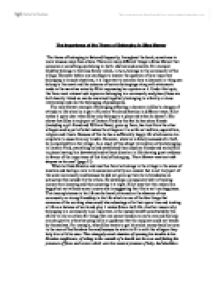 The Importance of Belonging in 'Silas Marner'

The Importance of the Theme of Belonging in Silas Marner The theme of belonging is featured frequently, throughout the book, sometimes in more tenuous ways than others. There are many different things in Silas Marner that someone or something can belong to: both abstract and concrete. For example Godfrey belongs to the Cass family which, in turn, belongs to the community of the village. However before one can begin to answer the question of how important belonging is in such situations, it is important to examine how a character or thing can belong to the novel and the outcome of certain belongings along with statements made in the narrative voice by Elliot expressing her opinion on it. Under this topic, the three most relevant sub-topics are belonging to a community and place (these are both heavily linked so can be examined together), belonging to a family or close relationship and also the belonging of possessions. The most blatant example of belonging affecting a character is Silas's changes of attitude to life when he is part of Lantern Yard and Raveloe in different ways. Elliot makes it quite clear when Silas truly belongs to a place and when he doesn't. She shows that Silas is truly part of Lantern Yard by the fact he has close friends (including a girl-friend and William Dane), grew up there, has trust from the other villagers and is part of what makes the village as it is so far as tradition, superstition, religion and rituals. ...read more.

2 Out of all the new relationships that he starts, his paternal relationship with Eppie, after he takes her in, is by far the strongest and has the largest impact on his personality and attitude to life and God. It is not surprising that Silas defends his right to provide for Eppie when Godfrey claims that is would be better for her if him and Nancy took care of her. This question of who she belongs to is very important in the novel as it determines the future of not only Eppie but Godfrey and Nancy, and Silas (who all claim her), and indirectly affects others such as Squire Cass who might, for example, suspect Godfrey's old secret marriage through his taking in Eppie. In chapter 19 of the book this issue comes to a conclusion when Godfrey and Silas debate on who has the right to look after Eppie and who would make her life happier. On reading this Elliot makes it clear that belonging to a family consists of far more than of being the same flesh and blood; it is being part of the same habits, lifestyle, religious practice and social class as well as having love for and from them and history with them. Eppie's decision also plays a large part in this as what one does belong to is largely decided by what one wants to belong to and fortunately for Silas, she takes Elliot's viewpoint on the situation. ...read more.

This is almost undeniable as in every case where someone gains riches or maintains them it does not directly ameliorate any aspect of their situation and in many scenarios it even makes things worse for them. For example, Silas's obsession with collecting gold turns out to be ultimately meaningless as he has no necessity or inclination to spend it and it gives him no true sense of fulfilment or happiness. Another proof of this is Eppie's indifference to Godfrey's property and fortune in terms of who she 3 chooses to look after her. In all the examples I have covered, with the significant exception of the belonging of material possessions, it seems that belonging has a great bearing on the outcome of many situations, which is often made clear through changes of belonging and their effects such as Silas's depression and rejection of religion after he is refused the right to belong to Lantern Yard any longer. One can also make hypothetical situations based on the book where things don't belong to what they should do and in most cases the outcomes will be drastically changed. For example, had Eppie chosen to live with Godfrey and Nancy, Godfrey would be punished for his secret marriage to Molly, Silas would have been devastated and Eppie's character and habits would change. Because almost every aspect of belonging affects the novel and in some cases in great magnitude, I come to a sure conclusion that the theme in general is of very high importance although not quite absolutely essential. ...read more.

This student written piece of work is one of many that can be found in our AS and A Level George Eliot section.

Related AS and A Level George Eliot essays