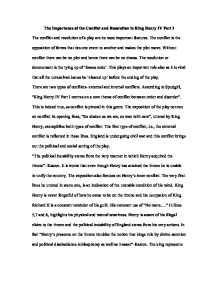 The Importance of the Conflict and Resolution in King Henry IV Part I The conflict and resolution of a play are its most important features. The conflict is the opposition of forces that ties one event to another and makes the plot move. Without conflict there can be no plot and hence there can be no drama. The resolution or denouement is the tying up of 'looses ends'. This plays an important role also as it is vital that all the unresolved issues be 'cleared up' before the ending of the play. There are two types of conflicts- external and internal conflicts. According to Spudgirl, "King Henry IV Part I centres on a core theme of conflict between order and disorder". This is indeed true, as conflict is pivotal in this genre. The exposition of the play centres on conflict its opening lines, "So shaken as we are, so wan with care", uttered by King Henry, exemplifies both types of conflict. The first type of conflict, i.e., the external conflict is reflected in these lines. ...read more.

Herein lies the theme of disguise. It is ironic that Henry used the art of disguise to acquire the throne and he now falls back on this same method to rid his conscience of the guilt he feels for deposing Richard II. Another example of conflict in the explanation is between the King and his son, Prince Hal. This conflict brings out the theme of family relationships. The news of Hotspur's victory resulted in Henry revealing that he wished that someone would tell him that Hotspur and Hal were switched at birth. Hotspur does things that " a prince can boast of," in fact Henry described him as " the theme of honoured tongue." The King is disheartened by the fact that while Hotspur is the epitome of honour, " riot and dishonour stains the brow" of the Prince. This conflict gives rise to the motif of honour. This motif of honour is pivotal to the entire play. In fact it is this motif that initiates the conflict between Hotspur and the King. ...read more.

Hal is the balance between the two extremes as he does not underestimate honour but he is not obsessed with it either. On the battlefield Hal fully understands the meaning of honour, and during his physical conflict with Hotspur, he exchanged all his indignities for Hotspur's honour when Hal killed him. The death of Hotspur and the defeat of the opposition led to the resolution of the play. The resolution is vital as it cleared up all the unresolved conflicts and as a result the resolution can be viewed as the bridge between the beginning and the ending of the play. In the resolution the father-son conflict was cleared up and the two extremes of honour were replaced by the real representation of honour - Hal. The resolution can also be used to conclude the fact that Hal has undergone peripeteia , and in so doing he has moved away from the tavern world and into the court world. Conflict and resolution are intertwined as without one there cannot be the other. The conflicts originated in the exposition and continued right up to the resolution of the play. ...read more.