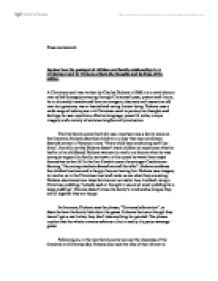 Prose coursework Explore how the portrayal of children and family relationships in A Christmas Carol by Dickens reflects the thoughts and feelings of the author. A Christmas carol was written by Charles Dickens in 1843 it is a novel about a man called Scrooge journeying through Christmas's past, present and future, he is ultimately transformed from an arrogant, obstinate and insensitive old man to a generous, warm hearted and caring human being. Dickens uses a wide range of techniques in A Christmas carol to portray his thoughts and feelings; he uses repetition, effective language, powerful verbs, unique imagery and a variety of sentence lengths and punctuation. The first family scene that I felt was important was a family scene at the Cratchits; Dickens describes children in a way that was not always deemed correct in Victorian times. "Every child was conducting itself like forty", this tells me that Dickens doesn't want children to experience what he had to in his childhood, Dickens was sent to work in a factory when he was young to support his family, as shown in this quote he wants them enjoy themselves ...read more.

Dickens uses his narrative style with a variety of sentence lengths and verbs to capture the intensity of the scene, he sets the pace of the scene and ensures it gives us the impression that the family are all rushing with excitement and to show his thoughts about how Christmas should be celebrated: "two smaller Cratchits came tearing in, screaming". This quote shows the excitement of the children with the words: "tearing" and "screaming". These are not words normally associated with happy children but using an eleven-line sentence, his narrative style and these verbs, Dickens ensures that the scene is fast, boisterous, detailed and joyous. Furthermore he also uses his original imagery very well in this Cratchit scene: "potatoes bubbling up, knocking loudly to be let out". This image keeps in well with the franticness of the scene, when the family are getting the dinner ready, as the potatoes need to knock loudly to be heard over all of the noise and amount that is happening. When the second of the three spirits appears two new characters are introduced, a girl called want and a boy called ignorance. ...read more.

Dickens uses the simile "still as statues" to give us an image of the Cratchits not moving at all, not running and dancing around the table! The Cratchits are all upset because of the death of Tiny Tim and small things persist in making them even lower: "the colour hurt my eyes, the colour reminds them of vibrant and colourful Tiny Tim. Tiny Tim played an important role in the Cratchit family and once he has gone Dickens' style of writing changes from an upbeat and happy style to a sad, emotional and mellow style. To conclude I feel that Dickens does portray his thought and feelings in A Christmas Carol and you can tell what he is feeling and you can tell what kind of a man he is and what he thinks about children, he doesn't go along with traditional Victorian views enjoys seeing children play and be happy and when they are not he lets you know that isn't happy about it. By James Tittensor 11lc ...read more.