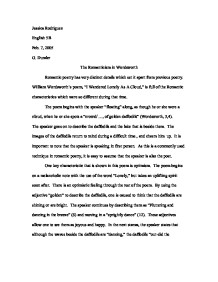 The Romanticism in Wordsworth

Jessica Rodriguez English 5B Feb. 7, 2005 G. Dumler The Romanticism in Wordsworth Romantic poetry has very distinct details which set it apart from previous poetry. William Wordsworth's poem, "I Wandered Lonely As A Cloud," is full of the Romantic characteristics which were so different during that time. The poem begins with the speaker "floating" along, as though he or she were a cloud, when he or she spots a "crowd/ ..., of golden daffodils" (Wordsworth, 3,4). The speaker goes on to describe the daffodils and the lake that is beside them. The images of the daffodils return to mind during a difficult time , and cheers him up. It is important to note that the speaker is speaking in first person. As this is a commonly used technique in romantic poetry, it is easy to assume that the speaker is also the poet. ...read more.

The daffodils, on several occasions, are referred to in a human sense. They are described as "a crowd/ a host," (3,4) and as dancing and "tossing their heads" (12). The speaker is identifying with nature. In the first line of the poem, the speaker is metaphorically referred to as a cloud. Then, the speaker's feelings are transmitted onto the daffodils, actually giving the daffodils his feelings. By doing this, the reader can associate his or her own feelings in a similar manner. It allows the reader to envision exactly how the speaker is feeling. This type of reverence for nature is a strong characteristic of Romantic poetry. Another important Romantic element used in this poem is the emotional one in human beings. This poem is full of emotion on the part of the speaker. ...read more.

Through his own imagination, he is able to express his innermost thoughts and feelings and escape from the worlds limitations. After he "wandered ... as a cloud" (1) he, "dances with the daffodils" (24). His imagination allows him an escape from the society and political strife that he is forced to live in. Although he physically cannot escape the everyday contention in his life, no element of society can cleave to his imagination. This poem offers much in the way of Romantic elements. Through the Romantic characteristics that are employed in this poem, one is able to fully understand the time in which the speaker was living. One is also able to truly feel and understand what the speaker is trying to convey. The emotion, with which the poem was written, provides one with a desire to pursue one's own imagination. The ability to do so, while including so many of the Romantic components, causes this poem to be pleasant and enjoyable to read. ...read more.