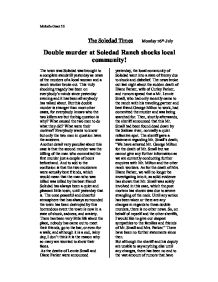 Michelle Grant 5E The Soledad Times Monday 26th July Double murder at Soledad Ranch shocks local community! The town was Soledad was brought to a complete standstill yesterday as news of the murders of a local woman and a ranch worker broke out. This truly shocking tragedy has been on everybody's minds since yesterday evening and it has been all anybody has talked about. But this double murder is stranger than most other cases, for everybody knows who the two killers are but the big question is why? What caused the two men to do what they did? What were their motives? Everybody wants to know but only the two men in question have the answers. Another detail very peculiar about this case is that the second murder was the killing of the man who committed the first murder just a couple of hours beforehand. And to add to the confusion is that the two murderers were actually best friends, which would mean that the man who was killed was killed by his best friend! Soledad has always been a quiet and pleasant little town, until yesterday that is. The once peaceful and cheerful atmosphere that has always surrounded the town has been destroyed by this horrendous event the town is now in a state of shock, sadness, and anxiety. ...read more.

From claims that Mr. Small firstly tried to rape Mrs. Parker and when his attempt failed, he strangled her in anger, to claims that Mr. Small was having an affair with Mrs. Parker and on account of her not giving him what he wanted at the time, he killed her. There have been various rumors but only the two victims of murder know what happened in the barn yesterday but sadly will not be able to tell anybody. As the ranch workers have been traveling down to the sheriff's office today, we spoke to a few of them to hear their views on the situation. A man named Candy Langstone told us the following, "Was me who found her! Lying there on the floor half covered with old hay! I've always hated her, little tart she was! Always causin' trouble! Had no right messin' with the guy's heads, she'd must husband! But she didn't deserve to be killed by 'im." We also spoke to a Mr. John Carlson and when asked for his view on Mr. Small and his friend Mr. George Milton, he said, "George and Lennie came to our ranch to work for Parker a couple of weeks ago. ...read more.

Locals have also been talking about what state Curley Parker was in yesterday as he tore through the town shouting out how he was "gonna kill Small" and anybody that got in his way, he would "kill them too!" When we were around the ranch, we dropped into a place beside it called 'Susy's' to see what we could find. There were only two or three men sitting round a table in silence. We talked to 'Susy,' she told that her place is usually a bit more crowded after the local men come in after their day's work but not today for respecting the dead. She told us that most of the men that come in to see her are workers up at the ranch but they hadn't been in as they were all down with the sheriff. "My heart goes out to them, poor fellows. This town has always been a quiet, peaceful little town but not since them two men turned up, troublemakers are what they are! This tragedy has obviously affected this town in a huge way as nothing like this has ever happened in this town before and people will most likely remain in a state of shock for a while. If anybody knows anyone involved in this situation or anything to do with it that might be of any help, please call us as soon as possible. Michelle Grant ...read more.