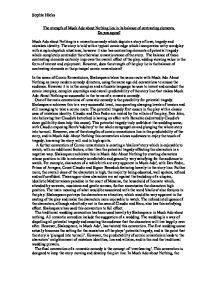 The strength of Much Ado about Nothing lies in its balance of contrasting elements. Do you agree? Much Ado about Nothing is a romantic comedy which depicts a story of love, tragedy and mistaken identity. The story is told with a typical comic edge which incorporates witty wordplay with simple slapstick situations; however it also has contrasting elements of potential tragedy which completely contradict the otherwise romantic stance of the story. The balance of these contrasting elements certainly improves the overall effect of the play, adding viewing value in the form of interest and enjoyment. However, does the strength of the play lie in the balance of contrasting elements or the principal comic romanticism? In the sense of Comic Romanticism, Shakespeare takes the same route with Much Ado About Nothing as many modern comedy directors, using the same age old conventions to amuse the audience. However it is in the complex and articulate language he uses to invent and conduct the comic interplay, complex courtships and overall predictability of the story line that makes Much Ado About Nothing so successful in the terms of a romantic comedy. One of the main conventions of romantic comedy is the possibility for potential tragedy. Shakespeare achieves this to a very successful level, incorporating changing levels of tension and still managing to take a comic route. The potential tragedy first occurs in the play with a classic case of mistaken identity. ...read more.

Here Shakespeare uses overhearing for comic and romantic purposes. The concept is also used by Don John and Borachio in order to mislead Claudio and Don Pedro and cause a series of tragic events. Claudio and Don Pedro 'accidentally' overhear a romantic conversation between Borachio and Margaret disguised as Hero and swear to slander Hero at the wedding for revenge. Here Shakespeare uses the convention as a platform for potential tragedy. Finally the concept is used to uncover the series of lies devised by Don John and Borachio and dispel the potential tragedy. Having carried out their plot to convince Claudio of Heros' adultery and stop their marriage from taking place, Borachio converses with Conrade, telling him about their done deed. This is overheard by the Watch, who consequently arrest the villains and reveal the plot. Shakespeare uses the convention as a basis for the storys plot line. Much Ado About Nothing contains a series of contrasting dramatic elements which surprise the reader throughout the play. There are the raw elements of romance and tragedy, the superficial elements of slap stick and sophisticated witty comedy and the pure, unconditional romance of Beatrice and Benedick Romance, however pure and unconditional it sometimes appears, is very closely linked to the element of tragedy. The typical romance in Much Ado' is between Claudio and Hero, whose relationship is the basis for the plays potential tragedy. ...read more.

We find the two characters are on bad terms and take every chance to insult and criticize each other; however this soon changes after a typical case of overhearing finds both Beatrice and Benedick madly in love with each other, although they find they can not admit this to anyone but themselves. The potential tragedy of the play takes their relationship to a new level and is the part of the play where Beatrice and Benedick profess their true feelings to one another. We then see it is a type of unconditional love in which each is willing to die for the other. At the end of the play this love is revealed to all and marriage prevails. Seeing their feelings change and grow throughout Much Ado about nothing assures the audience of the authenticity of the relationship and of their true, unconditional love. It is an element which doesn't incorporate any lies or betrayal, but simply the humane feelings of love. This is what makes the engaging and developing relationship between Beatrice and Benedick the purest dramatic element of the play. The strength of Much Ado about nothing lies in Shakespeare's strength in creating characters that convince and enchant, rather than in the strength of the stereo-typical conventions of a romantic comedy. The romantic comedy conventions are predictable and add nothing especially memorable to the overall play. Beatrice and Benedick do. ?? ?? ?? ?? Sophie Hicks ...read more.

The main strengths of the essay are its persuasive understanding of comedy as a genre and its sense of engagement with the text.
There is occasional lack of clarity in expression, and more attention should be given to technical accuracy in quotation technique and use of apostrophes.
****