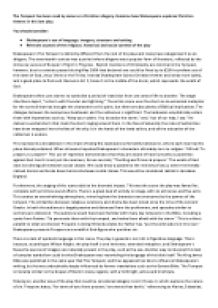 The Tempest has been read by some as a Christian allegory. Examine how Shakespeare explores Christian themes in this late play.

Transfer-Encoding: chunked ï»¿The Tempest has been read by some as a Christian allegory. Examine how Shakespeare explores Christian themes in this late play. You should consider: * Shakespeare’s use of language, imagery, structure and setting * Relevant aspects of the religious, historical and social context of the play Shakespeare’s The Tempest is distinctly different from the rest of his plays and many have categorised it as an allegory. The seventeenth century was a period where allegory was a popular form of literature, reflected by the immense success of Bunyan’s Pilgrim’s Progress. Explicit mentions of Christianity are minimal in the Tempest, however, due to a statute passed during May 1606 that declared one could be fined up to £10 for profane use of the name of God, Jesus Christ or the Trinity. Instead Shakespeare injects Christian themes and ideas more subtly, and a good place to find such themes is Act 1, Scene 1 in the middle of the storm, which represents the wrath of God. Shakespeare often uses storms to symbolise a period of transition from one area of life to another. The stage directions depict, “a storm with thunder and lightning.” The entire scene uses the storm as an extended metaphor for the turmoil that has brought the characters to this point, but there are also plenty of Biblical implications. The dialogue between the anonymous boatswain and the noblemen is significant. ...read more.

Elsewhere in the play Prospero retells how his brother usurped him by stating, ?in my false brother / awakened an evil nature.? Perhaps this betrayal is a recasting of the story of Lucifer?s battle against God. In Jacobean society good and evil were absolute and there was strong belief in demonic influence. Sin was not taken lightly. This idea of man choosing sin was a common idea of the times. The Puritans believed strongly in the doctrine of Total Depravity, the idea that when given the choice between good and evil man will eventually chose sin by default and is not capable of doing good without divine intervention. In John Calvin?s ?Institutes of the Christian Religion? he explains evil as ?a hereditary, depravity and corruption of our nature?. Shakespeare lived during one of the most tumultuous times in world history, and the single greatest issue in his lifetime was the Protestant Reformation. It had begun before Shakespeare was born; it lasted during his entire life; it continued after his death. Shakespeare was born during the reign of Elizabeth I. According to historian GR Elton, ?The Elizabethan settlement created a Church protestant in doctrine, traditional in organisation, and subject not to a lay pope but to the queen-governor in parliament.? At the time the Tempest was written, society had rapidly transformed from the centralised Protestantism of Elizabeth I to the staunch fundamentalism of James. ...read more.

Prospero is a traditionalist thrust from a changing society, before returning in glory. In many ways this mirrors the ever changing nature of English society, the pendulum swinging between Catholicism and Protestantism based on the whims of the current monarch. The mood of Catholics at the time is reflected in the words of Jesuit missionary Robert Persons, who in the early 1580s exhorted all Catholics to ?bear out with Christian courage what tempests soever shall storm upon them.? In the epilogue Prospero?s own journey to redemption reaches its conclusion: ?Let your indulgence set me free.? This overtly sacramental language hints at a Catholic undertone to the play. Some scholars would even suggest that Shakespeare himself was a secret Catholic. There is no doubt that his family were recusants who refused to conform to state Protestantism. Shakespeare?s father was fined for not attending the Church of England, therefore it is highly likely that these sentiments were passed on to his son and are reflected in the Tempest. To conclude, there are many aspects of Christian allegory in Shakespeare?s The Tempest. He never explicitly mentions the Christian Trinitarian God, but it is obvious that the Protestant ideas of divine election and predestination govern the play. A parallel could be drawn to the Book of Esther, where God is never mentioned by is apparent in all areas of the story. To quote the scholar James Russel, ?If I read it rightly, it is an example of how a great poet should write allegory.? ...read more.