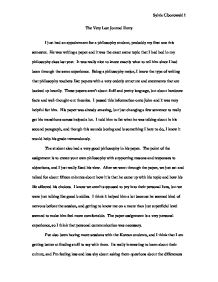 The Very Last Journal Entry I just had an appointment for a philosophy student, probably my first one this semester. He was writing a paper and it was the exact same topic that I had had in my philosophy class last year. It was really nice to know exactly what to tell him since I had been through the same experience. Being a philosophy major, I know the type of writing that philosophy teachers like: papers with a very orderly structure and statements that are backed up heavily. ...read more.

The student also had a very good philosophy in his paper. The point of the assignment is to create your own philosophy with supporting reasons and responses to objections, and I just really liked his view. After we went through the paper, we just sat and talked for about fifteen minutes about how it is that he came up with his topic and how his life affected his choices. I know we aren't supposed to pry into their personal lives, but we were just talking like good buddies. ...read more.

Its really interesting to learn about their culture, and I'm feeling less and less shy about asking them questions about the differences between America and Korea. I haven't had more than one session with the same student, though, which is good because I don't have to come up with more topics. However, I thought it would be nice to speak with the same student more than once because I know that people feel more comfortable speaking when they are already acquainted with the tutor. I think that these session are great though, and each student always thanks me and tells me that the one hour conversation has been such a help to their English speaking. It feels good to get complimented in this way. Sylvia Ciborowski 1 ...read more.