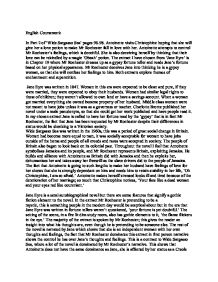 Themes of deception in 'Jane Eyre' and Wide Sargasso Sea.

English Coursework In Part 2 of 'Wide Sargasso Sea' pages 96-98. Antoinette visits Christophine hoping that she will give her a love potion to make Mr Rochester fall in love with her. Antoinette attempts to control Mr Rochester's feelings, which is deceitful. She is also deceiving herself by thinking that their love can be rekindled by a magic 'Obeah' potion. The extract I have chosen from 'Jane Eyre' is in Chapter 19 where Mr Rochester dresses up as a gypsy fortune teller and reads Jane's fortune based on her physical appearance. Mr Rochester deceives Jane into thinking he is a gypsy woman, so that she will confess her feelings to him. Both extracts explore themes of enchantment and superstition. Jane Eyre was written in 1847. Women in this era were expected to be clean and pure, if they were married, they were expected to obey their husbands. Women had similar legal rights to those of children; they weren't allowed to own land or have a savings account. When a woman got married everything she owned became property of her husband. Middle class women were not meant to have jobs unless it was as a governess or teacher. Charlotte Bronte published her novel under a male pseudonym, so that she could get her work published and have people read it. ...read more.

This is a contrast to Wide Sargasso Sea, where a lot of the novel is dominated by Mr Rochester's narrative. This shows that Antoinette does not have the same dominance as Jane, she is affected by her status as a Creole woman who has signed her life away to a man that now owns all her possessions. When Antoinette does narrate, she is weak and vulnerable, 'I have tried, I said, but he does not believe me. It is too late for that now'... 'Help me.' In the extract from Jane Eyre, Jane is deceived when she believes the person she is allowing to read her appearance is a gifted fortune teller. Mr Rochester deceives Jane but he is good at reading Jane and knows her well enough to be able to tell her what her personality traits are 'as to the mouth, it delights at times in laughter; it is disposed to impart all that the brain conceives.' Mr Rochester is also deceiving himself by having the idea that they will be able to be together when he knows that he is already married. The fact that Mr Rochester has disguised himself in order to get information from Jane shows that he is concealing his true self, and his past marriage to Bertha Mason from Jane. In Wide Sargasso Sea, Mr Rochester reacts completely differently and tries to drive the character of Antoinette away from his life rather than pursue her in the way he does with Jane. ...read more.

When Antoinette describes the money she bribes Christophine with as 'ugly money' it makes the reader see that she isn't proud of what she did. When Christophine and Antoinette repeat the word 'foolishness' it highlights the fact that what Antoinette is doing is desperate and compromising, Christophine then repeats the word 'beke' which she describes is foolishness translated into patois; This shows the reader that what they have done is foolish in both cultures. In conclusion the two extracts present the theme of deception in different ways. In Jane Eyre Mr Rochester blatantly deceives Jane by pretending he is someone else, he seems to have no shame when he reveals himself at the end of the extract, whereas in Wide Sargasso Sea, Antoinette is tormented by the act of deception she has done. Jean Rhys clearly wants to portray the innocence of Antoinette in this extract, the fact that she feels that she has been pushed to the limit by her husband and her only choice is to use magic to win him back, it's her last resort. In Jane Eyre the extract shows that Rochester doesn't care about whether Jane thinks he has deceived her or not, as a male in the society they live in, it is acceptable for him to deceive Jane, as she is only a woman. ...read more.