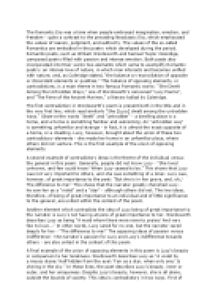 This balance of opposing elements, or contradictions, is a main theme in two famous Romantic works: &quot;She Dwelt Among the Untrodden Ways,&quot; by Wordsworth and &quot;The Rime of the Ancient Mariner,&quot; by Coleridge.

﻿The Romantic Era was a time when people embraced imagination, emotion, and freedom - quite a contrast to the preceding Neoclassic Era, which emphasized the values of reason, judgment, and authority. The values of the so-called Romantics are embodied in the poetry which developed during the period. Romantic poets, such as William Wordsworth and Samuel Taylor Coleridge, composed poetry filled with passion and intense emotion. Both poets also incorporated into their works two elements which came to exemplify Romantic poetry: an intense love of nature, in which man interacts and becomes unified with nature, and, as Coleridge stated, "the balance or reconciliation of opposite or discordant elements or qualities." This balance of opposing elements, or contradictions, is a main theme in two famous Romantic works: "She Dwelt Among the Untrodden Ways," one of Wordsworth's renowned "Lucy Poems", and "The Rime of the Ancient Mariner," a literary ballad by Coleridge. ...read more.

Wordsworth describes Lucy as being "A maid whom there were none to praise/ And very few to love..." In other words, Lucy cared for no one, but the narrator cared deeply for her - "The difference to me!" The opposing ideas of passion versus indifference - the narrator's passion for Lucy and Lucy's indifference towards others - are also united in the context of this poem. A final example of the union of opposing elements in this poem is Lucy's beauty in comparison to her loneliness. Wordsworth describes Lucy as "A violet by a mossy stone/ Half hidden from the eye!/ Fair as a star, when only one/ Is shining in the sky." In these lines, the poet describes Lucy's beauty, inner or outer, and her uniqueness. Despite Lucy's beauty, however, she is all alone, outside the bounds of society. This idea is contradictory in two ways. First of all, Lucy may be "Fair as a star," but there is not other star in the sky, and she may be like a "violet," but she is isolated, beside a "mossy stone." ...read more.

Wordsworth united such elements as passion and indifference and beauty and loneliness within the context of his poems - in other words, these discordant qualities had union because they coexisted in a similar environment, in this case Lucy's life. Coleridge, however, saw the union of discordant elements not simply as their coexisting, but as their coming together and being resolved, as in the case when the Mariner reaches union with the sea by coming to love and cherish it. The two poets' attitudes towards the meaning of union reflect their outlook on life. Most likely, Wordsworth, who never seems to offer a resolution of the opposing elements in his poem, was a person who believed that discord was something natural and unchangeable with which we must learn to coexist. On the contrary, Coleridge in his poem is constantly resolving the discordant elements and bringing them together in a peaceful manner. His outlook on life must have been more positive than that of Wordsworth, and he must have believed that all forms of discord can be somehow brought into union, or resolved. ...read more.