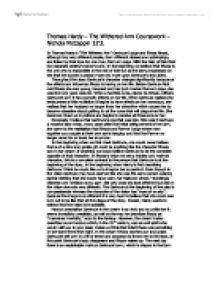 Thomas Hardy - The Withered Arm Coursework - Nichola McCappin 12'3. In Thomas Hardy's "The Withered Arm" Gertrude Lodge and Rhoda Brook, although two very different people, from different classes and upbringings, are linked by their love for one man, Farmer Lodge. With the help of fate their two separate destiny's become one. In the beginning we believe that Rhoda is the one who is responsible in the role of fate but as the story progresses we see that the burden is placed more and more upon Gertrude's shoulders. Throughout the story Gertrude's character changes significantly because of the effects and influences Rhoda is having on her life. Before Gertrude first met Rhoda she was young, innocent and had just married Farmer Lodge, she was kind and good-natured. When a horrible curse, placed by Rhoda, withers Gertrude's arm it has dramatic effects on her life. When Gertrude realises the seriousness of this mutilation it begins to have effects on her conscious, she realises that her husband no longer finds her attractive which causes her to become obsessive about getting rid of the curse that will plague her life. ...read more.

Gertrude was a woman who once would never have even thought about going to see a conjurer, but as she becomes more and more suspicious as well as desperate she visits a man named Conjurer Trendle, who lives in Egdon Heath. There are many comparisons one can draw from Trendle living in Egdon Heath, such as the darkness of the Heath and the dark character that Trendle possesses, the only people who lived in where often recluses and people, who in the 19th century, would have been considered freaks. Gertrude is appropriately attired for such a visit, as she is "clocked and veiled". Their visit seems to coincide nicely with the weather that day, "the wind was howling dismally over the slopes of the heath" and "thick clouds" where to be seen overhead suggesting perhaps that fate was watching over the events. Over the six years that where to follow her first visit to Trendle she began to feel the guilt of her disfigurement more and more as her husband no longer found her attractive and their marriage took a turn for the worse. However Gertrude does not give up on the marriage and is constantly trying to please her husband in the vain hope that he will love her once again. ...read more.

You are like her at last!" This is more evidence that the fate of Gertrude that was seen in the dream has come true. Each women had massive impacts on the others lives. Gertrude was Rhoda's first real friend since she had given birth to her illegitimate child. They confided in each other and Gertrude showed true acts of kindness towards her by giving her things she thought Rhoda would be able to use. However, Rhoda had a much larger impact on Gertrude's life. She scared her for the rest of her days with a withered arm, since that point Gertrude's life was never the same again. However Rhoda regrets this but I feel that she was just used as a tool for fate and in fact had little to no control over what would happen in the end. This story was filled with coincidences and chance meetings. It was by chance that Gertrude picked Rhoda to be her friend. It was by chance that the person who was hung was her husband illegitimate child. Hardy makes his readers believe fully in the idea of fate throughout this story. There is a very strong sense of things being controlled or planned out, like fate, not everything happened just by coincidence. ...read more.